In the occupied West Bank, the young "lions" and the "3rd Intifada"

Between the olive oil soap merchants and the bra sellers of old Nablus, young Palestinians navigate on scooters in the colors of their new heroes: "Areen al-oussoud" ("the lion's den") ) and their late leader Ibrahim al-Nabulsi. 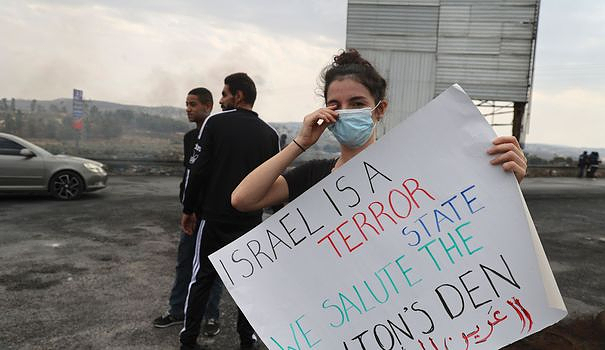 Between the olive oil soap merchants and the bra sellers of old Nablus, young Palestinians navigate on scooters in the colors of their new heroes: "Areen al-oussoud" ("the lion's den") ) and their late leader Ibrahim al-Nabulsi.

Before being killed in early August in an Israeli raid, this Palestinian, nicknamed the "lion of Nablus", galvanized local youth with a strong speech against the Israeli occupation of the West Bank, but also against the Palestinian Authority of Mahmoud Abbas accused of "cooperating" with Israel.

In the process, young fighters - some affiliated with Fatah, Islamic Jihad or Hamas - formed the "lions' den group", which quickly became popular via encrypted Telegram messaging and across the Palestinian Territories.

"I joined Areen al-oussoud because this group chose to resist the occupation with arms, without dividing into factions, and because its pillars are God and the nation," a young man told AFP. fighter nicknamed "Abou Oday".

"We are a relatively small group and we are in danger of being murdered. What happens next will depend on who joins us," he says.

This week, this armed group called for nightly demonstrations in the West Bank on Telegram, already followed by nearly 180,000 people. Quickly, Palestinians gathered in different areas, giving rise to clashes with the Israeli army.

Since a wave of anti-Israeli attacks in March, Israel has intensified its raids in the West Bank, including Jenin and Nablus, historic strongholds of Palestinian factions, in the northern West Bank.

Raids and clashes have killed more than 115 Palestinians, the heaviest toll in the West Bank for seven years. And the second highest since the end of the "second Intifada", the uprising of the early 2000s, after that of 1987-1993.

"This may be the start of a new intifada. The Areen al-oussoud are uniting the resistance. These young people are not under the patronage of a faction. They show that the resistance is more important than a movement in particular," Khader Adnan, a tenor of Islamic Jihad in the West Bank, who has been imprisoned by Israel many times, told AFP.

"The younger generation has no hope, no jobs, lives under occupation. But to have a 3rd intifada, it requires an agreement between the factions. This is not the case. Hamas seeks international legitimacy, the left is weakened, Fatah clings to power. Islamic Jihad is ready," retorted Abu Mustafa, a fighter in the first Intifada.

Today concentrated in the north of the West Bank, the protest could spread throughout the territory if, for example, the Israeli forces "assassinate Fathi Khazem, who is more than a hero but a true icon", estimates Khader Adnan . "There, the intifada would be complete."

Father of the late author of a fatal attack on three people in Tel Aviv on April 7, Fathi Khazem has become one of the most wanted Palestinians by Israel. The man lost a second son during a raid in the Palestinian camp of Jenin, where he occasionally goes out surrounded by dozens of hooded fighters armed with M-16s, AFP has seen.

In recent days, a rather rare occurrence, the Palestinian Prime Minister Mohammed Shtayyeh - whose government is criticized - went to the Jenin camp, where he appeared alongside Fathi Khazem and heavily armed fighters.

"The fight goes on from generation to generation, sacrifice after sacrifice," Mr Shtayyeh said. He accused Israel of "not wanting peace" and of intensifying the occupation since 1967 of the West Bank, where more than 475,000 Israelis now live in settlements contrary to international law.

At the same time, the UN mediator for the Middle East, Tor Wennesland, traveled to Nablus and Jenin to try to ease the tensions in this territory which has remained, in recent years, in the shadow of the Gaza, a geographically separated enclave controlled by the Islamists of Hamas.

Since its last war with Israel, in 2021, Hamas "wants Gaza to remain relatively calm, while allowing a dynamic to unfold in the West Bank", explains to AFP Mr. Wennesland, stressing that local groups have "probably had access to external funds".

"I am not in a position to predict which direction the mobilization and the narrative of Nablus will take, but the priority should be to calm the situation and curb the activities of radical settlers" who are increasing their attacks on Palestinians and even sometimes on the army Israeli.