In the northeast of Paris, the patient police hunt for crack sellers

A few meters away, plainclothes police, members of a specialized unit of the Ile-de-France network brigade (BRF), do not miss a beat. 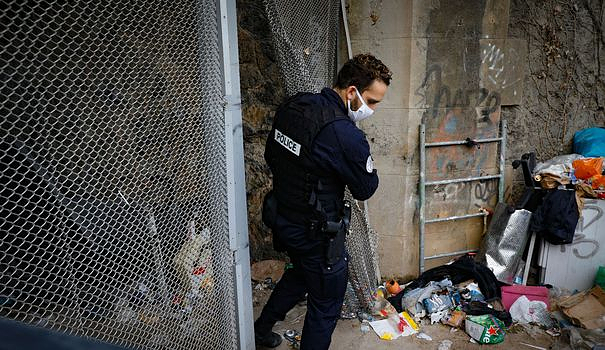 A few meters away, plainclothes police, members of a specialized unit of the Ile-de-France network brigade (BRF), do not miss a beat.

It was one of their colleagues who, installed at the headquarters of the Paris police headquarters to scrutinize the images from the CCTV cameras, guided them to the scene.

They wait a few minutes, the time for the seller to move away, to pounce on Malika before she beats her lighter and inhales her first puff.

Pierre tries to calm her down: "we're not here for you".

The policeman needs to seize the product to materialize the offense before arresting the "modou", or "street vendor" in Wolof, the language spoken in Senegal where the vast majority of traffickers originate.

He rushed into the maze of Grange-aux-Belles (Xe), a nearby city, but Olivier and Camille (first name changed) took him in the shadows and handcuffed him.

He declares his name Ahmad, to be 41 years old, arrived in Paris in 2016 from the suburbs of Dakar. He says he "lives outside" and has never had to deal with the police. On him, 229 euros, mostly in coins, but no crack.

"Either he had time to swallow his pebbles or he hid them somewhere," suspects Lieutenant Lounès, deputy head of the unit.

The police take him into custody at the premises of the "crack" group of the Regional Transport Security (SRT).

Interior Minister Gérald Darmanin asked him, when he took office in July, to eradicate "within a year" crack from the capital, a goal that many consider impossible to achieve.

Monday, at nightfall, the police officers of the unit spot them from afar, with their erratic gait, turning in the neighborhood "like goldfish in a bowl", image the officer.

The sellers are more discreet.

"It was easier before (the evacuation). They could stay six hours in the same place, it was enough to stay nearby and wait. Now they are much more mobile and work more by phone", explains Stéphane, one of the oldest in the service.

To reduce the risk of arrest, some give several consumers an appointment by message for a "flash sale" at a specific location in the metro.

"It's a game of cat and mouse", summarizes Lounès, "never depressed" despite the impression, sometimes, of "emptying the ocean with a spoon". "Our duty is done when we bring a seller to justice," he said.

Ahmad, at the end of his police custody, should be judged in immediate appearance with, no doubt, a prison sentence. "Today, the warrant of deposit (incarceration, editor's note) is systematic", welcomes Stéphane.

Malika will also be heard for the purposes of the investigation but, like most crack users, should receive a simple treatment order.