In the Médoc, grands crus, oysters and entrecôte on the menu of the "longest marathon in the world"

After two years of absence due to the Covid-19 pandemic, 8,500 runners, most of them in disguise and strolling to the rhythm of the bandas, took part in this race with schoolboy humor, which crosses the vines of the great wine appellations - Pauillac, Saint-Julien, Haut Médoc and Saint-Estèphe - from the left bank of Bordeaux. 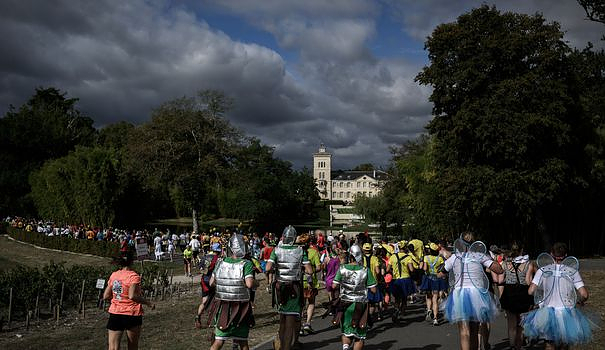 After two years of absence due to the Covid-19 pandemic, 8,500 runners, most of them in disguise and strolling to the rhythm of the bandas, took part in this race with schoolboy humor, which crosses the vines of the great wine appellations - Pauillac, Saint-Julien, Haut Médoc and Saint-Estèphe - from the left bank of Bordeaux.

Dressed as Rambo, Pirate of the Caribbean, Brice de Nice or in costumes in the shape of giant popcorn boxes, most of the thousands of amateur marathon runners - including many foreigners - played the game, donning eccentric disguises, to meet to the theme "the Médoc makes its cinema" of this 36th edition.

If the winners Freddy Guimard, for the men, and Sandra Gouault, for the women, completed the course in 2h29 and 3h10 - winning their weight in Grands Crus - the majority of the participants take their time to celebrate. They have until 6:30 am to cross the finish line and leave with a bottle promised to all the "finishers".

And it's a performance in itself, because throughout the event, 21 "wine-sports tests" - in this case tastings of great wines offered by the castles crossed - then up to 18,000 oysters, 200 kg of rib steak and ice cream are offered to runners as supplies.

"There are a lot of aid stations... it's very, very plentiful. We cover kilometers but there is no notion of time", explains Nicolas Alain, an amateur runner accustomed to the Médoc marathon and who came " on a relaxing outing".

For winegrower Emeline Borie, who had a supply point at km 20 on her estate at Château Grand-Puy-Lacoste, "water is nice, but wine is better".