In the Loire, the complex management of old uranium ore residues

The 18 hectare expanse blocked by a 500 m dyke remains the only visible sign of 25 years of mining in the municipality of St-Priest-la-Prugne. 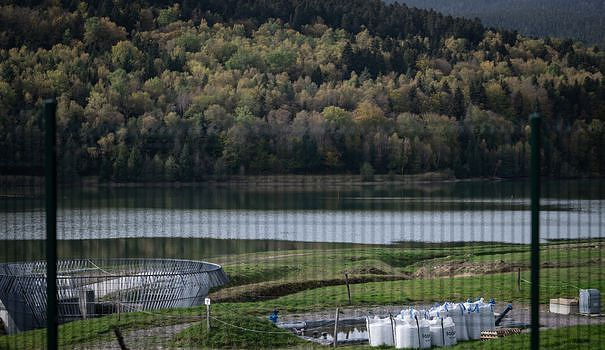 The 18 hectare expanse blocked by a 500 m dyke remains the only visible sign of 25 years of mining in the municipality of St-Priest-la-Prugne. The water covers the waste-residues - sand and sludge - from the treatment plant then attached to the mine.

On November 22, the operator Orano explained to local residents, associations, elected officials and experts the outline of a preliminary project aimed at covering these residues classified as long-lived low-level radioactive (LLLL), currently underwater, with rocks.

The device of the "Bois noirs" site is unique in France: geological specificities had led the CEA, the ancestor of Orano, to adopt it in 1986, while the residues of the 250 other French mines were encrusted .

The decision to cover the 1.4 million tonnes with a two-meter-deep "water blade", to form a natural screen against radon fumes, was taken with the approval of the authorities. But this solution is no longer seen as an absolute bulwark.

"It is not a permanent storage device. Global warming can lead to its drying out and weaken the dyke", explains Marie-Odile Gallerand, of the IRSN (Institute for Radiation Protection and Nuclear Safety), a member organization of the Site Monitoring Committee (CSS).

Questions "all the more significant since we are talking here about radioelements with very long lifespans. How can we be certain that, in a thousand years, an operator will provide the necessary maintenance?"

Today, however, "there is no alarming situation", the dam "fulfilling its function", according to the expert.

For the State, the solid cover by riprap is essential. In a decree in June, the prefecture ordered Orano to present its preliminary project within 24 months.

An event 4 months earlier had awakened his "vigilance", as explained by the sub-prefect Hervé Gerin: heavy rains caused overflows from the large basin, which the water treatment plant could not manage, however renovated in 2020.

This "should not have happened", recognizes Olivier Masset, in charge of "after-mining" at Orano. "But, according to him, we remained within the regulatory framework" on the levels of radioactivity noted downstream. And since then, "consequent work" has been carried out on this station presented as a pioneer, where zeolite, a mineral, traps radium.

"When we see this trial and error with a new station, what will happen the day when it will be necessary to carry out the big oil change with gigantic volumes?", laughs Arlette Maussan, spokesperson for the Collectif Bois noirs (CBN), who has been monitoring the site for decades.

"We will have to go through this solid solution", but "with guarantees from Orano", she insists, and in particular "a serious hydrogeological study", also demanded by the prefecture which also promises to be " vigilant" and does not exclude a second opinion. Orano announces it for March 2023.

On his side. the Criirad (Commission for Independent Research and Information on Radioactivity) is concerned about the "contamination of the waters, on land that is moreover faulty" which it says it has already measured up to "several tens of kilometers" downstream of the site.

The water flowing from the old galleries drowned in 1980 and "the bottom of the unsealed valley" lead its director Bruno Chareyron to say that the site is "an aberration", "a poisoned heritage from the beginnings of nuclear power, where the aftermath was not thought of".

"The only satisfactory solution would be to move the waste to a permanent storage center", according to the scientist. But there is none in France for these FAVL residues.

An excavation-evacuation-transport scenario had nevertheless been studied by Orano in 2018. Estimated at one billion euros, it was rejected for reasons of cost but also of acceptability, in connection with the incessant noria of trucks that would have required the building site.

The collection project, on the other hand, arouses a certain mistrust. The Criirad and the CBN, "furious", boycotted the meeting of November 22, a first. "An empty chair policy" regretted by the sub-prefect, who advocates "dialogue".

Orano also recalls having already presented the recovery option in the 2010s, arousing opposition, in particular from the CBN or local elected officials.

The mayor of Lavoine (Allier), Jean-Dominique Barraud, had at the time undertaken a march on Paris and has "not changed his mind since": "it is a question of public health, radioactive dust will fly for miles during the works!”, he fulminates.

It is true that the site will be colossal - "three to ten years of work", says Orano. This would include reconstructing the bed of the Besbre, on the left bank, less steep, which would promote the rise of fish, details Nadine Himeur, "after-mining" project manager at Orano. The rocks recovered would be used to cover the tailings.

To do this, Orano must acquire land. The steps have begun but some plots have been acquired by the CBN or by municipalities like Lavoine, whose mayor does not hide that he wants to "block the site".

"This redevelopment project has been going on for years. It must be co-constructed by all the players! There must not be a loser and a winner, but a consensus!", insists Ms. Gallerand of the IRSN.

Beyond the redevelopment, the CBN and the Criirad are still strongly opposed to Orano on the management of the waste rock, this weakly radioactive debris resulting from the work of the mine - and not from the factory -: they were used here and there as building material until the 1990s.