In the key state of Minas Gerais, young deputies symbolize a divided Brazil

Recently elected deputies to the Federal Parliament, they are the campaign soldiers of Jair Bolsonaro and Luiz Inacio Lula da Silva in their state of Minas Gerais (southeast). 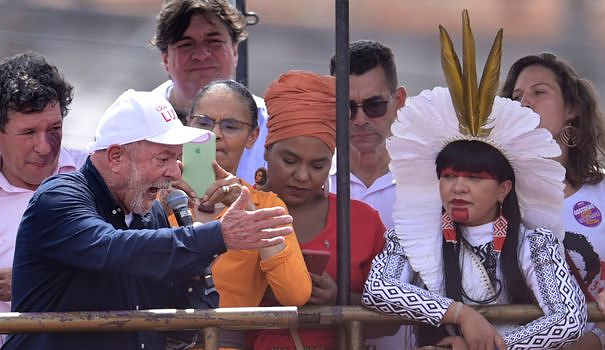 Recently elected deputies to the Federal Parliament, they are the campaign soldiers of Jair Bolsonaro and Luiz Inacio Lula da Silva in their state of Minas Gerais (southeast). The one where since 1989, the winning candidate is elected president of Brazil.

- Nikolas Ferreira the influencer at "war" -

A 26-year-old lawyer and influencer on social networks, affiliated with the Liberal Party (PL) of the far-right president, Nikolas Ferreira was the deputy who collected the most votes (nearly 1.5 million) during the legislative elections organized parallel to the first round of the presidential election.

For months, he has said he is at "war" against the "silent threat of communism", which will be at work if Lula, the favorite leftist candidate in the polls, wins.

"Are we going to reverse the situation or not? Abortion yes or no? Legalization of drugs yes or no?", Launched Mr. Ferreira during a campaign rally alongside his candidate.

Long face, expressive black eyes and bushy eyebrows, Nikolas Ferreira, with a speech delivered as if by an evangelical pastor, captures the attention of the crowds. He is considered one of the potential heirs of Bolsonarism.

A graduate of the Pontifical Catholic University of Minas Gerais, he says Brazilian universities are under the thumb of a "Marxist ideology" that seeks to destroy the traditional family.

He propagates his speech in multiple lectures published for his millions of followers on social networks, where he has become a figurehead for young conservatives.

He had to delete on the orders of the electoral justice the contents where he wrongly affirmed that Lula was pro-abortion or favorable to the legalization of drugs.

"I'm not a polemicist, I just follow what I believe in," he said in a recent interview.

At 32, Célia Xakriaba is convinced of living a "historic moment". Under the banner of the Socialism and Freedom Party (PSOL), she became the first indigenous deputy of Minas Gerais.

"Our top priority will be environmental issues," she told AFP at a campaign meeting in support of Lula in the regional capital, Belo Horizonte.

Originally from the territory of Xakriaba, in the north of Minais Gerais, she is pursuing a doctorate in anthropology. Wearing a yellow-green feather headdress on her long black hair, red paint on her face, she lends herself to photographs by making Lula's "L" with her thumb and forefinger.

She explains with determination how she intends to confront the powerful Brazilian agribusiness that she blames for deforestation records in the Amazon under the Bolsonaro government.

"We indigenous peoples have known for more than 500 years what resistance is. How can we accept a president who says he will not give an inch more land to the indigenous people?" it in reference to a controversial statement by Jair Bolsonaro in December 2018, shortly after his election. The demarcation of territories reserved for the natives has been at a standstill since he came to power.

Member of the indigenous delegation which toured Europe in 2019 to denounce the "serious violations" of the executive, Célia Xakriaba participated in COP26 in Glasgow at the end of 2021.

"Latin America and the European Parliament are awaiting the outcome of this election," she said.

She believes that the voices that came to her were not necessarily those of Lula sympathizers but came from people concerned about gender equality or environmental protection.

This presidential election is not just about the shock of two personalities that everything opposes. Many "do not see that it is a project of life and a project of death", she assures.

"He who deforests, kills".