In the desert of Qatar, a work of art desperately seeks visitors 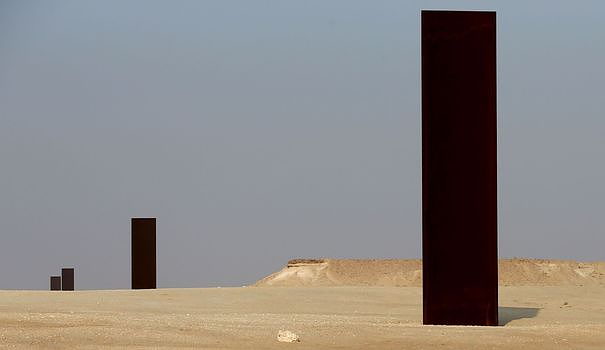 This part of the desert located in the Brouq nature reserve, renowned for its grandiose landscapes, is isolated and accessible only by 4x4. Few road signs point to the site and getting vehicles stuck in the sand is not uncommon, said Firas, a Syrian who has worked as a tourist guide in Qatar since 2006.

Not to mention the temperature that can rise up to 50 degrees Celsius, likely to discourage even the most keen on contemporary art.

Abdulrahman Al Ishaq, director of public art at Qatar Museums, the public institution responsible for managing museums, admits that it is not easy to go and contemplate the installation of the famous American artist. But he compares the journey to get there to "a pilgrimage". "The discovery of the work of art begins with the path taken", he says.

Richard Serra's work is one example of Qatar's massive investment in art, a trend accelerating in the run-up to the World Cup when football fans may be looking for activity between games.

The country is preparing to welcome more than a million people for this event, which begins on November 20.

In the meantime, the work of the American artist is the subject of little publicity, and on the spot, security agents responsible for monitoring the site 24 hours a day often find themselves alone.

“On days when there are a lot of visitors, we can have a hundred people,” explains one of them.

Richard Serra, 83, is one of America's best-known living sculptors. His creations weigh tons and are exhibited all over the world.

The sculptor was commissioned to install his blocks in the desert by Sheikha Al-Mayassa Al-Thani, the sister of the Emir of Qatar and president of Qatar Museums.

His work has been closely watched by security agents since acts of vandalism were committed in 2020 and 2021, after which at least six people were arrested.

Abdulrahman Al Ishaq regrets that the cleaning was "expensive". "Ideally, we shouldn't touch such a work of art because it will naturally rust over time," he explains.

More than 40 works of art are exhibited in Qatar, outdoors as in parks or in hotels, such as a 4.25 meter sculpture of a blue rooster by the German sculptor Katharina Fritsch.