In the campaign, a revived Biden denounces "semi-fascism" in the Republican camp

At a fundraising event at an opulent private residence, the 79-year-old Democrat harshly criticized the most extreme fringe of the conservative camp and its "extreme MAGA philosophy". 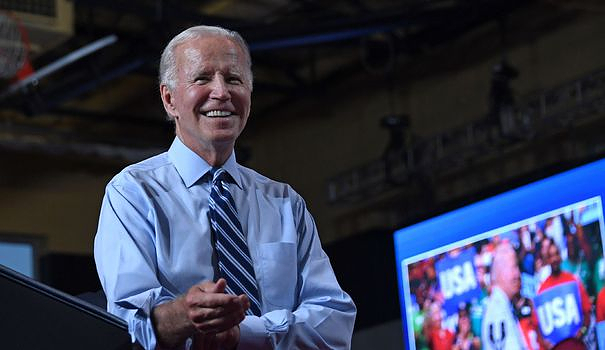 At a fundraising event at an opulent private residence, the 79-year-old Democrat harshly criticized the most extreme fringe of the conservative camp and its "extreme MAGA philosophy".

"What we are witnessing today is either the birth or the death knell of an extreme MAGA philosophy. It's not just Trump, it's a whole philosophy (...). It's is like semi-fascism," he said at the event in the inner suburbs of Washington.

Later, addressing a nearby Democratic Party campaign rally, he quipped: "You must vote to literally save democracy again."

If opinion polls are always to be taken with a grain of salt, the trend that has emerged for about a month in favor of the Democratic camp seems clear.

According to the FiveThirtyEight site, which aggregates polls, voters wishing for a Democratic victory in the midterm elections were even on August 24 a little more numerous (44%) than those hoping for a Republican success (43.6%).

We are far from the "red wave" (the color of the conservative party) still envisaged at the beginning of the summer, when high inflation seemed to destroy the chances of the president and his party.

The victory Tuesday of a Democrat in a hotly contested district of New York State was seen as a further indication of the reversal of the trend.

And some commentators are now wondering if Joe Biden – whose popularity rating has also been rising since a low in early July – is not going to make electoral history lie.

Traditionally, the president's party loses these elections, which renew all the seats in the House of Representatives and 35 of the 100 seats in the Senate.

The most important factor in this new momentum owes nothing to Joe Biden, quite the contrary: it is the end of the constitutional right to abortion, decided at the end of June by a very conservative Supreme Court shaped by Donald Trump.

While a majority of Americans are in favor of the right to abortion, the Democrats are determined to make this question a central issue in the ballot.

Joe Biden has once again promised that in the event of a victory in November, the Democrats would enshrine the right to abortion in a federal law, which would be binding on conservative states that have already banned or severely limited abortion.

The party can also rely on advances in the presidential program, in particular the vote for gigantic spending in favor of the fight against climate change and for technological innovation.

"There's no denying that the legislative gains are piling up for President Biden and that's reinvigorating the Democratic Party," said lobbyist Jonathan McCollum, who has worked on a number of campaigns.

Not to mention other strong announcements, whether it is the death of the leader of Al-Qaeda following an American strike or the partial cancellation of student debt.

On the economic front, inflation is showing signs of slowing, while employment remains booming.

A recent highly commented poll, revealed by the NBC channel, even indicates that the first concern of voters would now be "the dangers hanging over democracy", ahead of the cost of living - enough to further fuel the hopes of the Democrats, while the supporters of the former president continue to claim that Joe Biden "stole" his election.

The Republicans, they show signs of feverishness. Their leader in the Senate, Mitch McConnell, believes that the Conservative Party has only a one in two chance of capturing a majority in the upper house of Congress.

Is this trend unfavorable? Or the accumulation of procedures and investigations aimed at him? Still, Donald Trump, who does not carry Mitch McConnell in his heart, split a particularly virulent statement on Wednesday, calling him a "pawn" in the service of the Democrats.