In the Calanques near Marseille, the scourge of illegal boat rentals

On the Mediterranean and its shades of blue, near the rocks and pines that make up the remarkable landscapes of the Park, sometimes dozens of ships follow one another in the same place or enter the bathing areas. 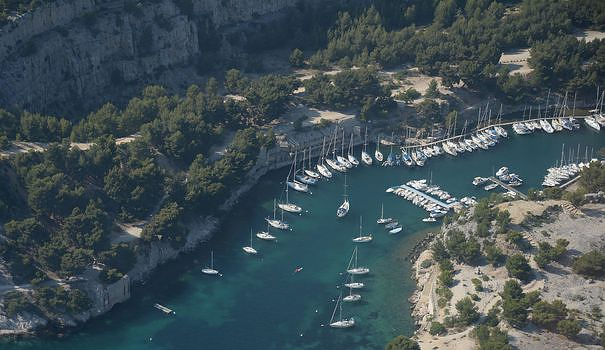 On the Mediterranean and its shades of blue, near the rocks and pines that make up the remarkable landscapes of the Park, sometimes dozens of ships follow one another in the same place or enter the bathing areas.

In the summer period and during long weekends in the spring, these rentals are increasing, causing a "peaceful" disorder which also involves security risks, regretted Nicolas Chardin, deputy director of the Park, to AFP.

Because some of these ships are rented illegally, despite the strict regulations of the Calanques National Park which conditions the rental of ships to a few dozen professional rental companies with approval and limits rentals between individuals to five times a year.

Violation of this regulation "endangers people's lives" and damages the environment, with "hydrocarbons leaking into the sea" and waste spreading, in the event of shipwreck, as happened two times in a few days at the beginning of the summer, regrets Mr. Chardin.

Damage repairs are borne by the owners of the ships, who can also be brought before the Marseilles court. On April 4, two boat rental companies were fined 5,000 euros and 3,000 euros in damages.

Unauthorized professional lessors risk up to two years in prison, a fine of 100,000 euros and the confiscation of the vessel.

"The ecological damage is now taken into account by the magistrates," insisted the Marseille prosecutor's office to AFP. Since 2012 and the creation of the Park, the court has adopted a criminal policy "unique and adapted to this preservation territory", with the establishment of a "Calanques operational group".

Result: the number of annual procedures on this aspect of illegal rentals has increased "from around ten in 2019 and 2020, to 19 in 2021", according to the prosecution.

To limit the damage, checks are regularly carried out by patrols which "check the mooring, fishing and commercial activities" of transporting tourists by boat, specifies the National Park.

But this fight is "complicated", because "they are often very punctual users of the sea", who sometimes ignore "the basic rules of navigation", regretted to AFP the spokesperson for the Maritime Prefecture.

"For us, having the approval is only advantages", welcomed Jérôme Bonnieu, manager of the rental company Easy rent Boat.

"In Marseille, as elsewhere, there are renters who are a little wild or who talk nonsense to customers", he notes: "But having the Park's authorization renewed each year shows confidence" in his company, according to him. .

If eight out of ten ships frequenting the National Park are rented ships, it is not possible to quantify the frequentation of the Calanques continuously, explains Mr. Chardin.

Only an aerial surveillance system would make it possible to know "that there are X hundreds of ships in the Park at the moment T", he explains: "On the trails, we can put eco-counters, but not at sea".

Some very touristy creeks, such as that of En Vau, are already prohibited from mooring, in order to reduce their attendance. “Eventually, we will be able to go sailing in the Calanques less and less”, predicts Mr. Bonnieu.

Franck, CRS and lifeguard in charge of monitoring a creek near Marseille, explained to AFP at the beginning of July his role of monitoring boats, at the level of buoys "about 300 meters from the beach", in order in particular to guarantee proper wetting.

"We must drop anchor in the sand, not in the vegetation", he recalled, referring to Posidonia, this endemic Mediterranean plant essential to the marine ecosystem but now threatened.