Independent farmers have confirmed that the planned protest tractorade will take place tomorrow in the Baza, Huescar and regions. 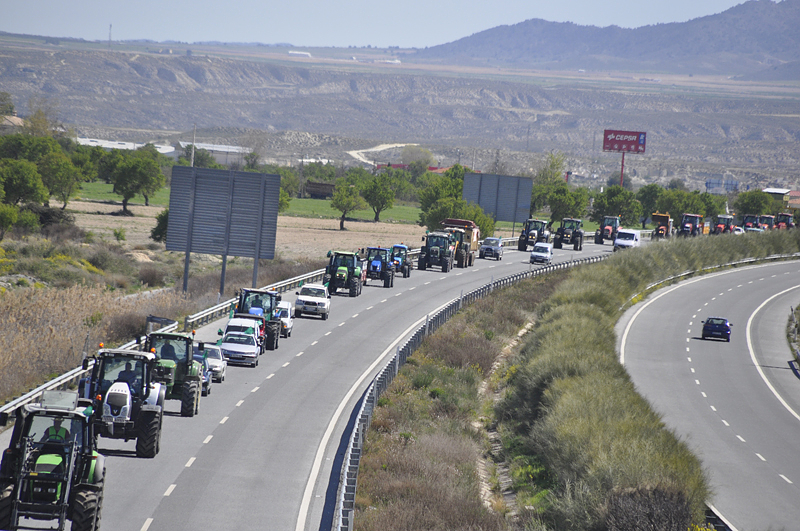 Independent farmers have confirmed that the planned protest tractorade will take place tomorrow in the Baza, Huescar and regions. The meeting point will be at 10 o'clock in the morning at Mano de Baza gasoline station. You will decide at that point what to do and which route you should follow. They want to travel along Jose Salinas avenue in principle. However, they don't know if they should go in the Baza y Caniles direction or another. Oscar Gonzalez, a Huescar farmer and spokesman for conveners, told IDEAL they are not allowed to cross the highway. The actions that will be taken will be determined by all at the meeting point.

The agrarian groups ASAJA, COAG and UPA, as well as the Agrifood Cooperatives from the province of Granada, have canceled the tractor raid in Baza and Huescar that was scheduled for Tuesday. This was due to the emergence of uncontrolled elements which could cause public disorder and other negative effects. A-92 users will be affected. According to farmers who met prior to the call, some farmers said that some of these violent attitudes were promoted by certain sectors. The four agrarian organizations have disassociated themselves from the calls to "cut roads even if we don't have permits". Representatives of the sector are clear in asserting the rights of their affiliates and associates. They call and support mobilizations, but they always respect the law and society. The agrarian associations say that they are not responsible for the actions and inactions of those who, as we know, have no knowledge of the situation. These groups have maintained that participation in protest acts is limited and therefore not all rights are valid. They therefore call for an end to the protest.

We are not terrorists

The so-called independent farmers, on the other hand, have said that they are not terrorists or criminals. They also recall that the person in charge at one of the agricultural associations in Granada told them to "press forward", to find 100 administrators to spread their call through social networks. Those administrators then looked for more, reaching 700 people who were activated in social media. "With so many people giving their opinions on the dire situation, there is always someone who says donkey shops. But we are farmers and ranchers, and we will not use any violence."

The protest poster is still being spread via social media and Altiplano Entrepreneur Association shared it with its partners. A PP mayor from Baza has also published videos encouraging people to take part in the protest. "My people, this cannot go on like this. We have to get out there and make our voices heard. Let them know that this is unacceptable and that they are not stupid or dumb.

"I urge all of you to attend tractorade next Tuesday 21st in the Baza Region and other places and provinces that will also be held."

They all agreed that the protest was over the outrageous rise in diesel B to 1.55 euros per litre. Some pumps have peaks at 1.7 euros per litre. The price of electricity is also 100% higher in this campaign. Farmers and ranchers have to spend energy on their farms in order to produce more, and the increased costs of food cannot be passed on.

‹ ›
Keywords:
AgricultoresMantienenTractoradaMananaComarcaBaza
Your comment has been forwarded to the administrator for approval.×
Warning! Will constitute a criminal offense, illegal, threatening, offensive, insulting and swearing, derogatory, defamatory, vulgar, pornographic, indecent, personality rights, damaging or similar nature in the nature of all kinds of financial content, legal, criminal and administrative responsibility for the content of the sender member / members are belong.
Related News