In the Basque Country, misunderstanding in the face of closed borders

From the village, the road winds up to 1,578 meters above sea level towards the pass, called Port de Larrau. 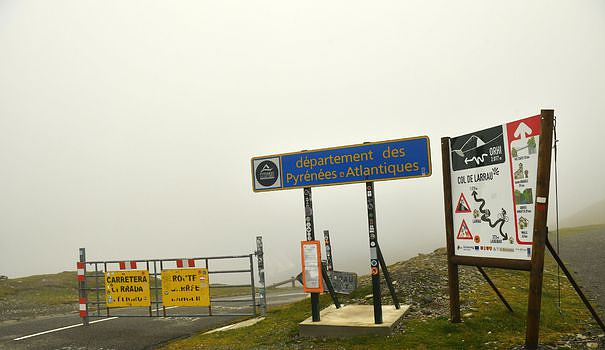 From the village, the road winds up to 1,578 meters above sea level towards the pass, called Port de Larrau. Placarded at the top, a prefectural decree informs of the closure of the passage until further notice, while a barrier cuts off half of the road leading, on the other side, towards Navarre and Pamplona.

"It's incomprehensible but apparently this rule is not intended to be understood," protests the mayor, Jean-Dominique Iriart.

Checks are infrequent - "random" in the words of the prefecture - but are enough to alter neighborhood relations or the flow of visitors. The elected official is responsible for verbalizing the offenders but does not want to "apply the absurd". Especially since Larrau is located in a border agropastoral area that is difficult to control.

This November day, the pass was shrouded in fog and battered by a strong wind. "There, if someone passes on the flanks, no one is able to say if it is a shepherd, a hiker or a migrant", sighs the city councilor. Or the communal employee who has to defy the ban every day to bring back the herds that have gone to graze on the other side of the border.

Further down the slope, the activity of the village campsite is suffering from the measure, according to its owner Fabrice Gaillaguet, who has suffered nearly fifteen cancellations this year.

In this tourist valley in the Basque hinterland, "20 to 25% of the clientele is Spanish". "We are not in a commercial passage for business. So here, in order not to carry out checks, we close, it costs less in personnel", he criticizes. The authorities are concentrating the workforce elsewhere.

Originally, around fifteen crossing points were closed in 2021 on the Franco-Spanish border. Half have since reopened but eight remain closed: three others in the Basque Country - in the town of Aldudes, at the Ispeguy pass after Saint-Étienne-de-Baïgorry and a pedestrian bridge in Hendaye - and four in the east of the Pyrenees .

"These closures make it possible to concentrate most of the action of the police, gendarmerie, customs and the Sentinel mission on the other entry points currently open" between the two countries, more borrowed, explains the prefecture of Pyrenees-Atlantiques.

In 2021, 13,000 non-admissions at the border were recorded in the department, a jump of 120% compared to 2020. Nine thousand were from January to October 2022, according to the authorities. And the administrative detention center of Hendaye is under pressure, indicated this fall a police union and Cimade.

Still, the measure, locally, is misunderstood. Pierre Etchemaite, restaurateur, talks about his dismay in the face of customers. "If only we had an explanation to give them (...) We are told about Vigipirate, terrorism, but no one brings us an answer," he said with a shrug.

For Mathieu Bergé (DVG), elected municipal official in Bayonne and regional councilor for New Aquitaine in charge of cross-border cooperation, these closures without an end date are a "message sent to the far right".

"We want to give an image of authority and control, there is a political instrumentalization of the border, but the measure has no real effectiveness. The border has become the variable for adjusting the fears of the State", he complains.

In a letter addressed to Prime Minister Elisabeth Borne, on October 21, the PS president of the Region, Alain Rousset, pointed to a "unilateral" decision, at the origin of "very strong difficulties".

At the beginning of November, associations helping migrants symbolically removed the barriers placed to close access to the pedestrian bridge that connects Hendaye, in France, to Irún, in Spain. Local activists are indignant there at the omnipresence of the police which pushes migrants, according to them, to try to cross the border river of La Bidasoa, where seven people have drowned since 2021.

Three Algerians also lost their lives in October 2021, hit by a train in Ciboure, a few kilometers from Irún.