In the 42nd minute, France's defender had to remove his gold chains

France leads 1-0 against Poland at half-time. 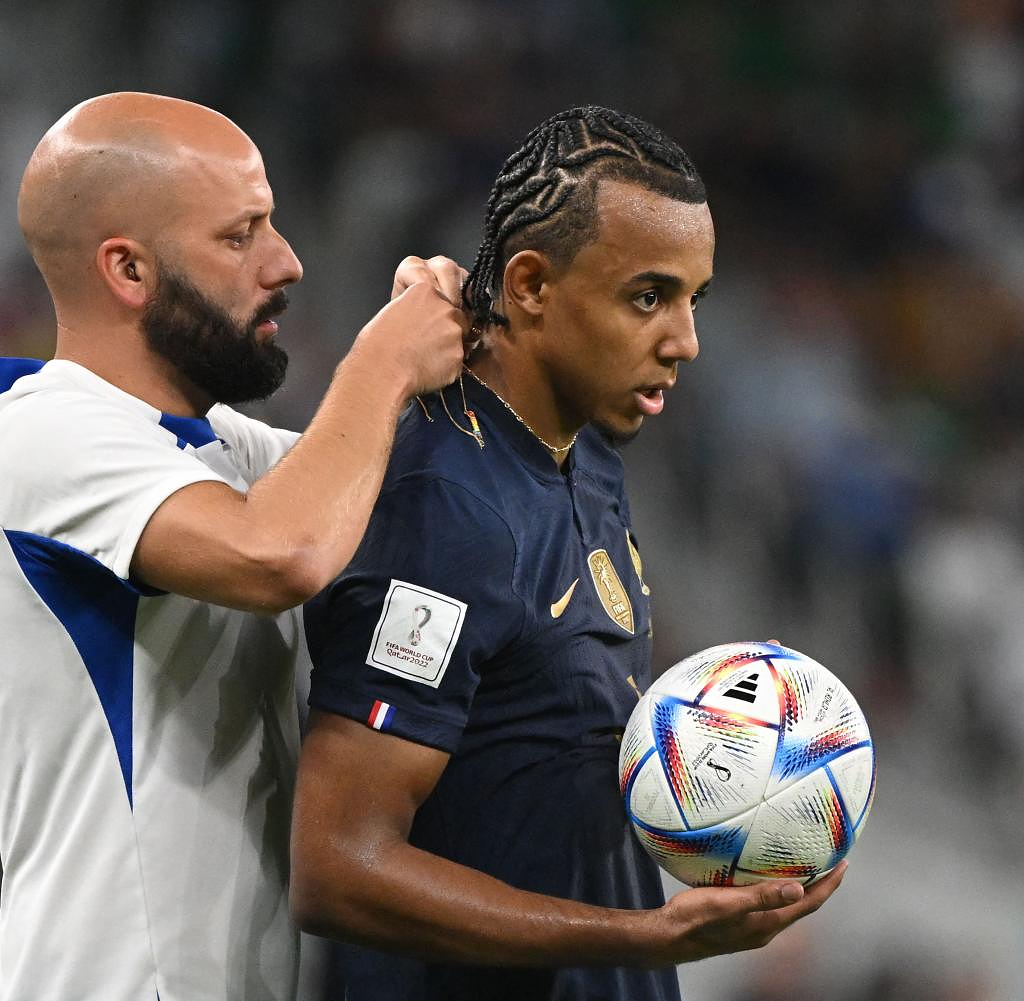 France leads 1-0 against Poland at half-time. Olivier Giroud gives his team the lead in the round of 16 just before half-time. A curious scene occurs just a few minutes before the gate. A supervisor fiddles with Jules Koundé's neck. The reason: The full-back ran up with two gold chains. Wearing jewelry on the pitch is prohibited due to the risk of injury. However, the team of referees did not notice the Frenchman's neck decorated with gold until the 40th minute. After some fiddling, the supervisor has released the fasteners and the two chains in his hand, the game can go on.

Superstar Neymar is available again for the Brazilians in the round of 16 of the World Cup. When asked by a journalist, national coach Tite answered succinctly on Sunday in Doha: "Yes." The Seleção will start the knockout phase of the tournament in Qatar on Monday (8 p.m. / ZDF and Magenta TV) against South Korea.

The 30-year-old trained with the ball for the first time after his foot injury in the opening game against Serbia (2-0) on Saturday. "I feel good, I knew I would do it now," Neymar wrote on social media, along with photos from training.

With only one Bundesliga professional, world champion France goes into its round of 16 game against Poland for world footballer Robert Lewandowski. Central defender Dayot Upamecano from FC Bayern Munich is in the starting XI. His club colleagues Benjamin Pavard and Kingsley Coman are initially on the bench when they meet up with long-time Bayern striker Lewandowski, as are Frankfurt's Randal Kolo Muani and Mönchengladbach's Marcus Thuram.

According to Croatian national coach Zlatko Dalic, former world footballer Luka Modric (37) is not allowed to resign from the national team after the World Cup. "It won't be his last tournament," Dalic insisted: "We will still need him in the future."

RB Leipzig's Josko Gavrdiol also wants to continue playing with Croatian idol Modric. "I really don't hope it's his last World Cup. I'm hoping for many more moments together," said the defender before Croatia's round of 16 game against Japan on Monday (4 p.m. / ZDF and MagentaTV).

Should Croatia fail prematurely, this match could have been Modric's last international match. Due to his age, there is speculation that the midfielder will resign from Real Madrid. Dalic, however, made it clear that he would continue to plan with Modric.

England coach Gareth Southgate is surprised by the early elimination of the World Cup favorites Germany, Belgium and Denmark. The 52-year-old said this before his own round of 16 duel with African champions Senegal this Sunday (8 p.m., in the WELT sports ticker). “That shows how competitive things are here at the World Cup. These teams have been very good in past tournaments. Belgium was in the semi-finals of the World Cup, Denmark was in the semi-finals of the European Championship. We expected them to go far," Southgate said.

Germany was not mentioned by the head coach, although the question was aimed at all three nations. England last got it in the preliminary round in 2014. This time Captain Harry Kane and Co. are on course with two wins and a draw. "We scored the most goals in the group stage. We have a decent defense. I feel we are well on our way. We've done our job, now the second tournament begins," said Kane before the game in Al Khour. If they win, world champion France would be a possible opponent in the quarter-finals.

The Swiss national player Xherdan Shaqiri does not see the gestures of his teammate Granit Xhaka against Serbia (3: 2) as targeted provocations. "You always make it so big. He knows what he did there. You have to ask those involved yourself," said the 31-year-old before the Confederates' round of 16 duel with Portugal on Tuesday (8 p.m.). Xhaka clashed with the Serbian bench in the second half of Friday's group game and grabbed his crotch. "I didn't see what he did. I only saw a few pictures," Shaqiri said. "I don't think Granit wanted to send an extra shout out to anyone."

Switzerland win a tense slugfest against Serbia to reach the last 16. After the game, however, everyone is talking about Granit Xhaka. The Swiss shows obscene gestures and provokes the Serbs. There are pack formations. The highlights in the video.

After the game, Xhaka pulled on his team-mate Ardon Jashari's jersey – with his name in front. Jashari is also the name of an independence fighter who is considered a co-founder of the Kosovar liberation army UÇK and a symbol of military resistance against the Serbs. His jersey campaign had "definitely no political background", Xhaka had asserted at the press conference afterwards. Like Shaqiri, the Swiss captain has Kosovar roots. Kosovo has been an independent republic since 2008, but Serbia still considers it a part of its territory. At the 2018 World Cup duel, Xhaka and Shaqiri provoked the Serbs after their goals by forming the double-headed eagle with their hands - a symbol of the demarcation of Kosovo from Serbia.

Lothar Matthäus criticized the DFB, Oliver Bierhoff and the players after the German national team had been knocked out in the preliminary round. Despite some tournament mistakes by Hansi Flick, Germany's record national player is in favor of the national coach remaining in office. "Hansi draws the right conclusions and I think he's the right man for 2024," said Matthäus on Sunday on the BILD TV station with a view to the home European Championship in 2024. That's how long Flick's contract with the German Football Association (DFB) runs. "I think the team has a lot of trust in Hansi Flick," said the 61-year-old.

However, the national coach, with whom he is friends, must become "stricter and tougher" when dealing with the national players. Matthäus also recalled Franz Beckenbauer, who was also not perfect in his first tournament, the 1986 World Cup, but four years later became world champion with the DFB team in Italy. In Mexico 1986, however, the national team reached the final and were not eliminated early on, as they are now in Qatar.

After the preliminary round it was already over for the national team. From a German perspective, the World Cup is anything but a success. On TV, however, there are German tops as well as flops. Among them are many strong women.

Former DFB sports director Robin Dutt has defended national coach Hansi Flick and managing director Oliver Bierhoff after losing the preliminary round again at the World Cup. "We're trying to change this patch with a new coach - I really hope we don't do that because the wound underneath is suppurating and bleeding," Dutt said in a Sky interview. "The coach is definitely not the problem, because then we'll still be looking for a world championship title in 16 years."

Dutt, currently working as a coach at Wolfsberger AC in Austria, was the successor to Matthias Sammer in 2012/13 as sports director at the German Football Association before he went back to Werder Bremen as a coach.

Even then, he pointed out the problems, especially in training, and called for more speed within the association. "Oliver Bierhoff was completely of my opinion at the time," said Dutt, defending the manager of the national teams and academy, who had been heavily criticized after the failure in Qatar. “The DFB as a whole has to move. With Joti Chatzialexiou there is a man who fought back then and we have to support him with all our might now," said Dutt about the sporting director of the national teams. Overall, it just takes too long at the DFB before things are implemented.

Even at the beginning of the knockout phase, the interest of TV viewers in the World Cup in Qatar is low compared to previous tournaments. The round of 16 on Saturday evening remained under the five million mark, as did the last games in the group stage. The live broadcast of the game between Argentina and Australia was watched by 4.71 million people on ARD and, according to the broadcaster, accounted for a market share of 18.9 percent. 4.27 million (16.5 percent) tuned in to ZDF's last preliminary round match between Serbia and Switzerland on Friday evening.

Before the DFB selection was eliminated, the ratings for the games without German participation had risen somewhat. The top value came in the match between Poland and Argentina on Wednesday with 6.72 million and a market share of 25.1 percent.

The average of the ZDF games in the preliminary round was around 4.78 million. Four years ago at the games of the World Cup in Russia this value was still over 9 million. Telekom, which broadcasts all World Cup games in Qatar, does not publish any figures.

Probably the most surprising reward was Holland's Denzel Dumfries just over an hour after his outstanding game against the USA. His football coach Louis van Gaal was asked if he was proud of Dumfries, who assisted twice and scored one in the 3-1 win against USA. "I'll show you," replied van Gaal, followed up with action and kissed his defender. "I already gave him a big kiss on Thursday and now I'm doing it again."

In addition to Dumfries on the right, left-back Daley Blind also capped off his impressive game with a goal and an assist. "I'm enormously proud of my full-backs," emphasized van Gaal. Dumfries was also named FIFA Player of the Match after the match.

The Netherlands deservedly beat the USA and reached the quarter-finals of the World Cup. An absurd goal by the Americans briefly creates suspense in the closing stages, but the Dutch find a quick answer. The highlights in the video.

At the Question Time that followed, Dumfries explained – still unkissed – how he got his first name. "I was named after Denzel Washington and I'm very proud of it. Denzel Washington is a very strong personality with a strong voice," said the 26-year-old from Inter Milan. In the quarterfinals he has another opportunity for great deeds. The Netherlands meets Argentina on Friday.

In view of the latest media reports about his health, Brazilian football legend Pelé (82) has turned to his fans on social networks. “My friends, I want everyone to keep calm and think positive. I am strong, have a lot of hope and am continuing my treatment," wrote the three-time world champion on Instagram on Saturday. “I have a strong belief in God and every message of love I receive from you all around the world gives me new strength.”

In addition, Pelé published a medical bulletin from the Albert Einstein Hospital in São Paulo. “Edson Arantes do Nascimento has been admitted for a re-examination of his chemotherapy for a colon cancer diagnosed in September 2021. He is continuing treatment and is in stable condition," the statement said. "He has also responded well to treatment for the respiratory infection and has shown no deterioration over the past 24 hours."

The newspaper "Folha de S. Paulo" had previously reported that Pelé was no longer responding to chemotherapy. Cancer treatment in the hospital has been suspended and he is only receiving palliative care. For example, he gets medication for the pain and shortness of breath.