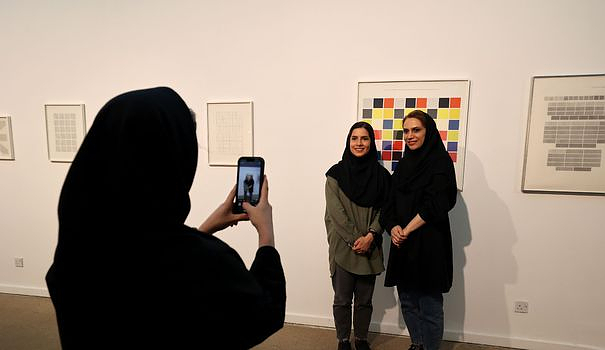 Since the end of June, the exhibition "Minimalism and conceptual art" has presented 132 works by 34 world-renowned contemporary artists, according to the director of the museum Ebadreza Eslami.

These include works by Marcel Duchamp, Sol LeWitt, Donald Judd and Christo and Jeanne-Claude.

"The museum surprises me every time I come for an exhibition, and this one is no exception," said visitor Chahine Rajabi, 35.

“The welcome was wonderful,” rejoices the director of the museum, Ebadreza Eslami, especially after three years of long periods of closure due to the pandemic.

According to him, the large number of visitors is notably due to the fact that "38 masterpieces" are exhibited for the first time.

The collection of the Tehran Museum of Contemporary Art has some 3,500 works of art, including hundreds "very precious", according to its public relations manager, Hassan Noferesti.

The museum was inaugurated during the reign of Shah Mohammad Reza Pahlavi, two years before the Islamic revolution of 1979.

Its design was inspired by Iranian desert mills, used to capture and circulate cool air in hot environments.

Most of the museum's collection was built up by Shah's wife Farah Pahlavi.

It has masterpieces by Western artists such as Paul Gauguin, Pablo Picasso, Rene Magritte, Jackson Pollock, Andy Warhol and Alberto Giacometti, according to Iran's Culture Ministry.

The museum also houses an important collection of Iranian modern and contemporary art.

After the Islamic revolution of 1979, the themes of many Western works were considered too daring to be exhibited.

Many works have thus spent a large part of the last decades languishing in the museum's reserves.

The current exhibition, which runs until mid-September, includes a collage by Italian artist Michelangelo Pistoletto entitled "Green Curtains" and an untitled work made from hemp by Canadian-American sculptor Jacqueline Winsor. .

“I was delighted, I really enjoyed” the exhibition, says painter Solmaz Daneshvar, 28, fixing the “Rock Salt

"It's a period in art history after the modern and post-modern eras and the war," she explains, referring to the 1960s and 1970s when most of the pieces featured in the exhibition have been produced.

"I loved the last room of the exhibition in particular, where the artist had worked with fluorescent light", says Chahine Rajabi, referring to the work "Untitled" by the contemporary American icon Dan Flavin.

Both Minimalism and Conceptualism emerged in the 1960s as a reaction to the predominant artistic movements of the time, namely Abstract Expressionism and Modernism.

"When we talk about minimalism, we are mainly talking about the environment and not the work; this is what must be taken into consideration for the layout of the exhibition", emphasizes Behrang Samadzadegan.

But the exhibit was at the center of controversy last week when amateur video showed two silver insects under the glass frame of a rare photo by late German photographer duo Bernd and Hilla Becher.

Having gone viral, the video, the authenticity of which could not be independently verified by AFP, has aroused the concern of art lovers.

The museum then issued an official apology, assuring that the work of the Bechers, known for their photos of industrial structures, was not damaged and closed its doors to the public for two days for fumigation.