The Swedish manufacturer with the iconic griffin Scania is not alone in developing autonomous vehicles, but it recently became the first in Europe to use them to deliver goods. 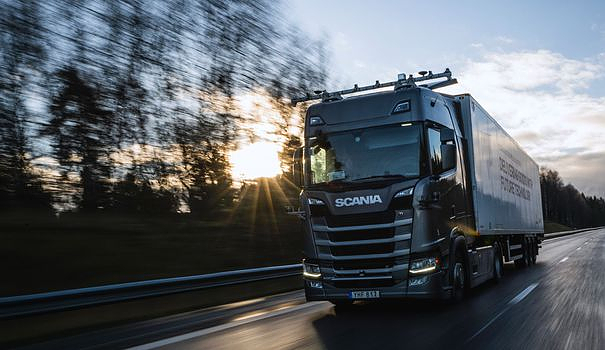 The Swedish manufacturer with the iconic griffin Scania is not alone in developing autonomous vehicles, but it recently became the first in Europe to use them to deliver goods.

The latter are brought "from point A, to take them to point B, and this completely autonomously", Peter Hafmar, head of automatic solutions at Scania, told AFP from outside the manufacturer's laboratory in Södertälje, south of Stockholm.

In this pilot project, the autonomous truck drives between Södertälje and Jönköping in southern Sweden to deliver products for fast food restaurants.

From the outside, the truck looks like a conventional truck, except for a rail on the roof decked out with cameras and detectors on the sides, reminiscent of insect antennae.

Inside, if the steering wheel and seats are in the expected place, the driving panel is dotted with small devices and screens whose cables run to the computer bay hidden behind the passenger seat.

Sitting in the passenger seat, engineer Göran Fjällid has his eyes glued to the screen of his laptop which receives the videos sent by the cameras of the truck, as well as text on what the vehicle sees.

A second screen shows a 3D visualization of the truck on the road and surrounding vehicles.

"If the road markings disappear for a while, we will then use the GPS system and it (the truck, editor's note) will remain perfectly placed on its line", explains Göran Fjällid.

According to him, the truck drives "better on its own than when driven manually".

But according to the engineer, it took a lot of trial and error before arriving at this result.

Some adjustments will have been necessary, such as the way the truck manages the insertion on the highway and its behavior when a vehicle overtakes it.

Göran Fjällid records every unexpected reaction of the truck - such as braking or slowing down for no apparent reason - and then examines each data.

All the detectors are also calibrated daily before each departure.

According to Peter Hafmar, certain technological and legal difficulties still have to be overcome before these self-driving trucks become popular.

-The end of drivers?-

Will the arrival of self-driving trucks be a threat to truck drivers, one of the most widespread professions in the world?

For Mr. Hafmar, these vehicles are above all a response to the lack of drivers all over the world.

According to a report by the International Road Transport Union (IRU) published in June, there were some 2.6 million truck drivers missing worldwide in 2021.

For Peter Hafmar, it will still take time before artificial intelligence is able to manage all the logistical aspects.

At first, self-driving trucks will surely be for long journeys, while the last mile will remain the preserve of drivers, he adds.

Autonomous vehicles also have other advantages, he points out: since computers don't need to sleep or rest, trips can be planned at any time of the day or night, when traffic is less dense. Trucks can also drive slower - but longer - to save fuel.

Other companies are in the race for self-driving trucks.

Startups like Aurora, Waymo, Emnark Kodiak or Torc (with Daimler) are carrying out trials in the United States.

In China, Baidu also announced the release of an autonomous truck at the end of 2021.

In Europe, the manufacturer Iveco, which collaborates with the startup Plus (backed by Amazon), recently announced the end of its first phase of circuit tests and will launch road tests.

On the Swedish side, Einride plans to launch road tests in Germany soon.