In Sudan, for the harvest, we ring the Waza

With gourds that he cuts, moistens and assembles, he forms long horns, similar to the didgeridoo of the Australian aborigines, with a flared bell. 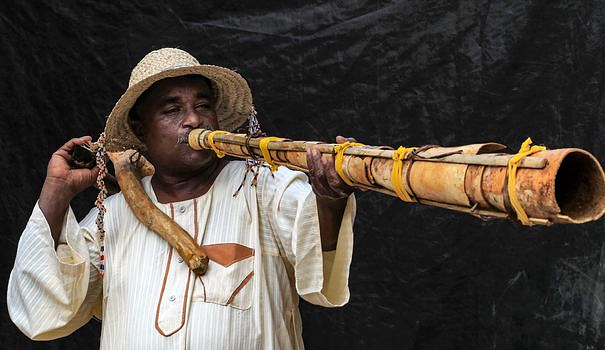 With gourds that he cuts, moistens and assembles, he forms long horns, similar to the didgeridoo of the Australian aborigines, with a flared bell.

His Waza are of different sizes: the longest can be two meters while some are no larger than an oboe.

"It was our parents who taught us how to make Waza," said Mr. Ismail, a 70-year-old resident of the village of Ganis Charg in Blue Nile state, bordering Ethiopia.

"Traditionally, the Waza are used to celebrate the harvest", which begins in November after the rainy season in Sudan, a country where again this year nearly 150 people have been killed and tens of thousands of houses destroyed by torrential rains .

Agriculture is a major sector for the 45 million Sudanese because it represents 43% of jobs and 30% of the GDP of the country, one of the poorest in the world, mired in the political and economic slump since a coup. military a year ago.

Each Waza has its own tone, the instruments are played in groups. In general, each "fanfare" is made up of thirteen members, some of whom sometimes use animal horns to tap their instrument in rhythm.

These instruments are particularly used by the Blue Nile Funj ethnic group.

Youssef Ismaïl, he belongs to the Barta, a clan of African origin which was recently involved in a violent clash for land against the Hausa ethnic group, also African in the country mainly populated by Arab tribes.

When the guns fell silent at the end of the summer after more than 120 deaths and the forced displacement of thousands of families, Waza bands came out to sound their instruments.

In recent decades, the Waza have invited themselves to weddings and other local festivals because these traditional trumpets "are intimately linked to the rituals of the different communities of the Blue Nile", explains to AFP Mohamed Soliman, professor of musicology at the University of Sudan.

Determined to preserve this heritage, Dafallah Ali Moustafa, a 51-year-old Sudanese music enthusiast, presents Waza in his Folk Music Center in the suburbs of Khartoum.

Cleverly, he shows AFP how each instrument can be played, brandished in the air for the shortest or pressed to the ground for the longest.

Mr. Ismaïl, he wants to perpetuate the tradition. He teaches the making of Waza and teaches the youngest to play alongside him.

“Every year we have to make new Waza,” he says.

The instruments can be kept away from rain, insects and humidity thanks to conical cases that he also knows how to shape, he explains.

“We taught everything to our children,” he adds. "They will keep this tradition alive, even when we are gone."