In Spain, the long fight of the "stolen babies" of Francoism

"It was there," said this 60-year-old paramedic, teary-eyed and knotted in her throat, pointing to the mass grave in the Alicante cemetery (southeast) where her sister was supposed to have been officially buried. 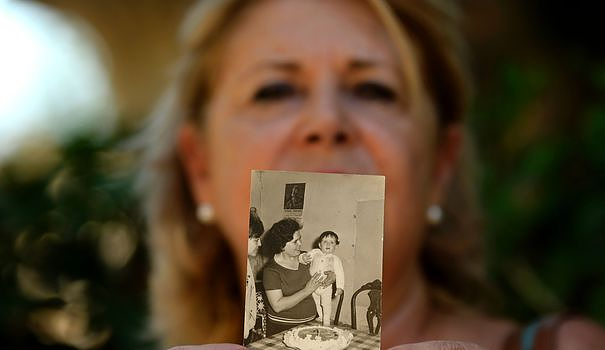 "It was there," said this 60-year-old paramedic, teary-eyed and knotted in her throat, pointing to the mass grave in the Alicante cemetery (southeast) where her sister was supposed to have been officially buried.

"My mother was told that my sister died two days after the birth (in 1962). She was not allowed to see the body and we did not let her attend the funeral," says Maria Jose to AFP.

About ten years ago, when the first cases of "stolen babies" broke out in the country, Maria José and her parents, gripped by "doubt" and "anguish", wondered if they were not also victims of this scandal.

They then begin to collect documents, tainted with irregularities, before taking legal action which will order the exhumation of the bones in 2013.

Since then, the sexagenarian, who chairs an association devoted to stolen babies, has tirelessly pursued her research.

She left her DNA in several genetic banks and hopes that her sister, seized with doubts about her origins, could have done the same. “DNA is our hope,” she explains, praying to “one day receive a call” from a laboratory.

Definitively adopted on Wednesday by the Senate, a flagship text of the left-wing government recognizes for the first time as victims of Francoism babies taken from their families during the Civil War (1936-1939) and the dictatorship (1939-1975).

During the repression that followed the conflict, this institutionalized theft was intended to remove children from Republican women accused of transmitting to them the "gene" of Marxism.

But it then affected, from the 1950s, children born out of wedlock or into poor or large families.

Often thanks to the complicity of the Church, they were declared dead after childbirth, without providing proof to the parents, then adopted by couples unable to have babies and in general close to the "national" regime. -catholic" of Franco.

After Franco's death in 1975, baby trafficking continued, mainly for financial reasons, until 1987 and the adoption of a law strengthening the control of adoption.

Similar thefts also took place under the military dictatorship in Argentina or under that of Pinochet in Chile. In Argentina, the organization of the Grandmothers of Plaza de Mayo estimates that just under 500 babies were born in captivity and were illegally handed over to other people.

In Spain, there is no official estimate of the number of babies stolen, but victim associations speak of several thousand children involved.

Justice had estimated in 2008 that more than 30,000 children of Republicans who died or were taken prisoner during the Civil War, some of whom may have been "stolen", were placed under guardianship by the Francoist state between 1944 and 1954 alone.

2,136 complaints on this subject were registered in Spain between 2011 and 2019 but none were successful, mainly due to the prescription of the facts.

If justice is down, a few rare Spaniards, like Mario Vidal, have still managed to miraculously find traces of their relatives.

"My adoptive father told me that they had paid 125,000 pesetas (725 euros) to adopt me", explains this 57-year-old technician-architect living in Denia (south-east) who started in 2011 to the search for his biological parents.

He then immersed himself for three years in the archives of the Madrid region, where he was born, and managed to identify his mother... who had died 16 years earlier.

"It was one of the hardest days of my life," he says, confiding that he was torn between "the satisfaction" of knowing his origins and "the crushing blow" of learning of his death.

Coming from a very conservative family, his mother had had him out of wedlock at the age of 23. If an official document mentioned an abandonment, a relative will tell her that she had tried several times to recover it from the orphanage but had been prevented from doing so and had even been imprisoned for it.

Mario will then manage to find his half-brother, who will die three years later, but remains without knowing who his biological father is. “We are the children of an era, in which those who held power exercised it as they saw fit,” he says.