In South Africa, the Zulu people crown a controversial king

In this southern African country with 11 official languages, sovereigns and traditional chiefs are recognized by the Constitution. 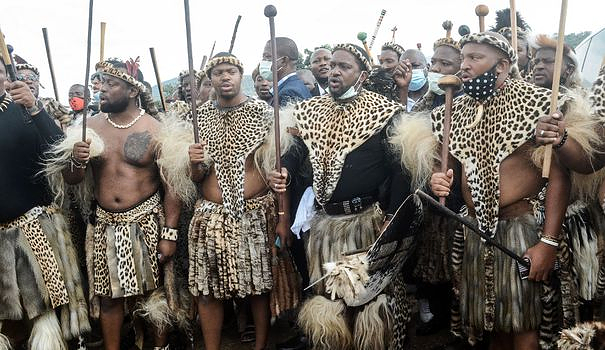 In this southern African country with 11 official languages, sovereigns and traditional chiefs are recognized by the Constitution. Kings without executive power, they wield deep moral authority and are revered by their people.

To succeed his father Goodwill Zwelithini, who died last year after 50 years of reign, Misuzulu Zulu, 47, will enter as tradition dictates in the "cattle pen" of the palace of KwaKhethomthandayo, in Nongoma, a small town in the province of KwaZulu-Natal (KZN, south-east) and cradle of the largest ethnic group in South Africa.

Only a few members of the royal family and amaButho (warriors) will be allowed to enter this sort of temple of the Zulu Nation. A handful of people know what will happen there...

The sovereign, dubbed by the ancestors during this first rite of passage, "will then be presented to the nation which will undertake to respect him and accept him as king", explains to AFP Gugulethu Mazibuko, specialist in African cultures at the University of KZN.

The country's 11 million Zulus, or almost one in five South Africans, generally respond en masse to invitations to celebrate their culture.

Long columns of men dressed in animal skins and armed with assegais mimic war, a legacy of the glorious warlike past against the settler.

Because the greatness and fame of the Zulu people, which resonates beyond the African borders, is originally based on the exploits of Chaka, ruthless warrior and creator of the army who, in the 19th century, won a bloody battle against the British Empire .

Barefoot warriors, dressed in monkey-skin skirts and bracelets, defeat a regular army. The imagination does the rest, historians find a nickname: "the Spartans of Africa".

"This nation is proud of its identity," says Ms. Mazibuko.

Recently, the battle raged inside the palace. Son of the late king's favorite, Misuzulu Zulu is disputed by the first wife and her descendants. King Goodwill Zwelithini had a total of six wives and at least 28 children.

Last weekend, the splinter clan celebrated the coronation of the eldest of their line, in a desperate attempt to seize the throne.

The first queen, who took her wrath to court, claims to be the only legitimate one. And his daughters dispute the authenticity of the will. His execution was suspended but the queen was dismissed.

And last twist in the royal saga, brothers of the deceased king announced Thursday at a press conference a mysterious third pretender to the throne.

Besides the crown, the king's fortune is also at the center of the dispute.

The Zulu king is a wealthy owner of land managed by a trust of which he is the sole administrator. It covers nearly 30,000 km2, the size of Belgium. And nearly 1,500 properties from which he can derive rents.

Known for leading a lavish lifestyle, King Zwelithini received around 75,000 euros from the state a year for his personal use, as well as a budget of 4.2 million euros for the functioning of the kingdom, according to a published scale. in the official journal.

Support for a sovereign who plays the role of guarantor of social peace. "He watches over the well-being of his subjects, cares about issues of poverty and community development", pleading for example for the creation of infrastructures, explains Sihawukele Ngubane of the University of KZN.

In the coming months, President Cyril Ramaphosa will seal the coronation by formally recognizing the king of the Zulus, hoping to end the rivalries that threaten peace over the kingdom.