In South Africa, the day of the Zulu king's coronation

In the southern African country, sovereigns and traditional chiefs are recognized by the Constitution. 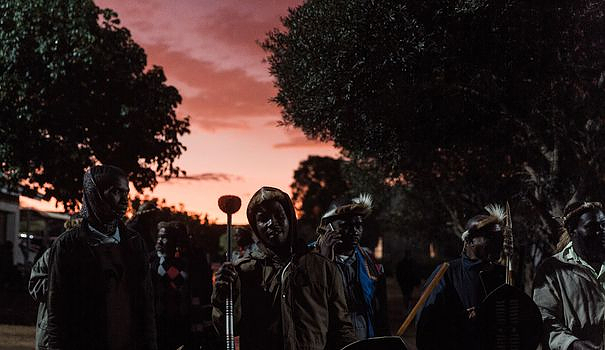 In the southern African country, sovereigns and traditional chiefs are recognized by the Constitution. Kings without executive power, they exercise moral authority and are deeply respected by their people.

In the morning, a colorful crowd of several thousand people had already gathered for the celebration in honor of Misuzulu Zulu, 47, now also called Misuzulu kaZwelithini, after his father, who died last year after 50 years of reign.

Troops of "amaButho" warriors poured into the palace, forming impressive columns bristling with assegais and shields of animal skin. The king's protectors must pledge loyalty and respect to the new ruler.

The women wore traditional outfits, pleated skirts and beaded belts for some. Others are draped with fabrics bearing the effigy of the sovereign with the inscription "Bayede", "Greet the king" in the Zulu language.

Young girls dance topless. Each in turn, they enter the circle to the rhythm of celebratory songs, raise their legs high before making their soles resound in the dust.

The country's eleven million Zulus, almost one in five South Africans, responded en masse to the invitation to celebrate their culture.

"Today the king will be recognized by the entire Zulu Nation," his sister, Princess Ntandoyesizwe Zulu, 46, told AFP, leaving dressed and a little feverish from the palace of KwaKhangelamankengane, in Nongoma, a small town in the KwaZulu-Natal province (KZN, south-east).

Just after midnight, the sovereign entered the "cattle enclosure", a sort of temple of the Zulu Nation where men, in a restricted circle, communicate with the ancestors.

Protected by a high fence made of tree trunks, the symbolic enclosure was closed to view on Saturday morning. "It's a sacred place, we can't tell the world what's going on there," said Muntomuhle Mcambi, 34, one of the "amaButho".

During the week, the king killed a lion in a nearby reserve, the last rite before the coronation. Tradition was respected, without however silencing the dispute within the palace itself.

The late King Goodwill Zwelithini left behind six wives and at least 28 children. The first wife claims to be the only legitimate one and asks the courts to decide. On Saturday, his clan announced that it had filed an urgent appeal to stop the coronation.

“Those who are Zulu and know the traditions know who the king is,” castigated Themba Fakazi, adviser to the previous ruler and supporter of Misuzulu Zulu. Other voices in the palace have risen to end a battle that is making the "people of heaven" a laughing stock, some say.

Misuzulu Zulu is the son of his father's third wife and favorite. He himself has two wives, one of whom is from Eswatini, and at least four children.

The fortune he inherits is also at the center of the feud. The Zulu king enjoys nearly 30,000 km2 of land, approximately the size of Belgium, managed by a trust of which he is the sole administrator. He derives a comfortable income from it, in particular by collecting rents.

Known for leading a lavish lifestyle, King Zwelithini also received around 75,000 euros annually from the state for his personal use and a budget of 4.2 million euros per year for the functioning of the kingdom, according to a government scale. .

The king has yet to be formally recognized by President Cyril Ramaphosa, with a ceremony due to take place in the coming months.