In Slovenia, a favorite media lawyer for the presidential election

The polls credit Natasa Pirc Musar with more than 50% of the voting intentions, against 44 to 49% for his conservative rival Anze Logar, former Minister of Foreign Affairs, winner of the first round on October 23. 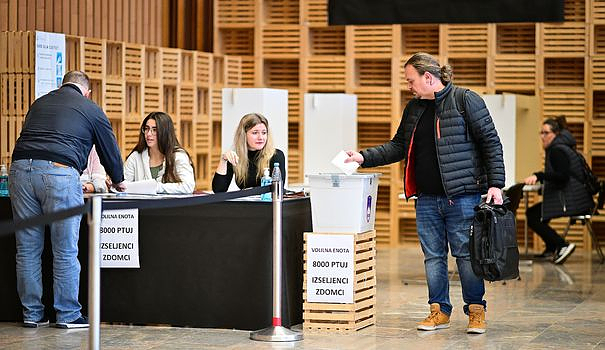 The polls credit Natasa Pirc Musar with more than 50% of the voting intentions, against 44 to 49% for his conservative rival Anze Logar, former Minister of Foreign Affairs, winner of the first round on October 23.

The 54-year-old lawyer, who in the past represented the interests of former American First Lady Melania Trump, of Slovenian origin, should indeed be able to count on the votes of center-left voters, whose candidate was defeated. at the ballot box.

In the event of weak mobilization, however, the deal could turn to the advantage of Mr. Logar, 46, warned analysts in the country of 2 million inhabitants, from the former Yugoslavia and member of the European Union. (EU) since 2004.

"I entered this battle to win," he said, full of optimism as he voted in the capital Ljubljana early in the morning.

Among the early risers, the retired Silva Lotric confided her hope of seeing Ms. Pirc Musar triumph. "If she wins, she will definitely make changes (to the role of president)," she told AFP.

During the campaign, the candidate, who defines herself as "liberal", has indeed highlighted her desire to give more substance to this essentially ceremonial position.

"The president cannot be neutral, he must have an opinion", be "a moral authority", she underlined in the interval between the two rounds, questioned by AFP. “I have never been afraid to make my voice heard”.

A former television presenter, Natasa Pirc Musar made a name for herself by directing the Slovenian Data Protection Authority in the 2000s.

A tireless defender of the political class, she opened her law firm in 2016, regularly scouring TV sets as an expert.

Passionate about motorcycles, she has been the target of attacks because of her husband's lucrative investment activities, especially in tax havens.

"Perhaps I suffered more brutal accusations than the others because I am a woman. I was called a careerist, you would never say that of a man", she lamented, wanting to be "women's voice" in Slovenia and abroad.

Opposite, the conservatives dream of revenge after their heavy defeat in the April legislative elections.

Anze Logar, one of the main tenors of the Slovenian Democratic Party (SDS) of Janez Jansa, however, was careful to keep his distance, with the exception of a brief appearance side by side of the two men on the evening of the first round.

Without a label, unifying slogan and "moderate" campaign: the courteous candidate, who never leaves his bike, has promised to be "the president of all citizens", far from radical positions against the media and government justice Jansa - which he was part of from 2020 to 2022.

A message that hit home with voters like Rok Novak, an economist in his fifties who met in an office in Ljubljana, anxious to appease "in such a polarized country".

While his opponent is supported by Liberal Prime Minister Robert Golob, Anze Logar claims a role of "supervision", a counterweight "desirable for the democratic system", he explained to AFP.

"But to his credit, he has more than 20 years of loyal service in a strongly hierarchical party where everyone must answer to the president (Janez Jansa, editor's note), which suggests that he risks being a simple puppet" if elected, said Uros Esih, columnist for the daily Delo.