"Living here is difficult," the 34-year-old day laborer told AFP, living with his wife and two children in the village of Sandaf, located in an area of ​​the province of Aleppo (north) controlled by rebels. 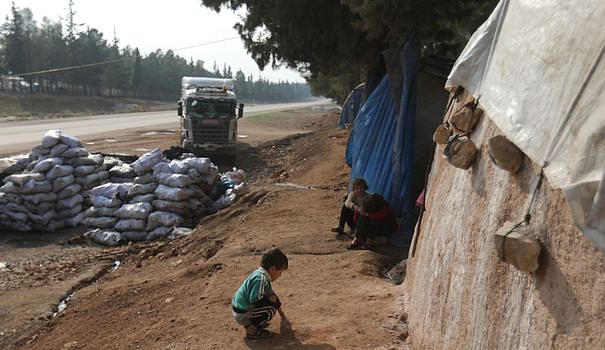 "Living here is difficult," the 34-year-old day laborer told AFP, living with his wife and two children in the village of Sandaf, located in an area of ​​the province of Aleppo (north) controlled by rebels. Syrians supported by Ankara.

"In addition to all that we have had to endure, misery, lack of work, poverty, now we are again threatened with displacement," he adds.

In response to a deadly attack on November 13 in Istanbul, Turkey launched a week later raids in neighboring northeast Syria on positions of Kurdish fighters described as "terrorists".

And its president Recep Tayyip Erdogan reiterated his intention to order, "when the time comes", a ground offensive in northern Syria to take control of three Kurdish areas, including Tal Rifaat, located less than 10 km from Sandaf.

Ahmad Yassine already had to leave his region of the neighboring province of Idleb, then in the grip of fighting, a few years ago.

He and his family only dream of "returning to (their) land".

Displaced people in Sandaf fear that a Turkish operation against Syrian Kurdish forces will lead to retaliatory bombardments against their area.

During the war in Syria, the Syrian Kurds took control of much of the northeast, establishing an autonomous administration there despite the wrath of Ankara.

Turkey, which is deploying soldiers in Syria, has carried out several operations against Kurdish forces and is seeking to establish a security zone in Syrian territory on the border.

In the Sandaf camp, children, often barefoot, play in the dust and stones while laundry dries between the tents.

According to Mohamed Abu Ali, 45, there were sporadic bombardments before the latest Turkish strikes, which caused "panic and fear" in Sandaf.

Also from Idleb, this father of five children, one of whom is in a wheelchair, hopes "either a military operation that will allow us to return home, or (that) they reach an agreement for us to stay here".

A resumption of the conflict "would be the straw that would break the camel's back for millions of people already living in dire humanitarian conditions", with the risk of a "new wave of displacement", warned the NGO Save The Children.

On the front line with the Kurdish area of ​​Tal Rifaat, pro-Turkish Syrian fighters are protected by sandbags, under thick fog.

One of them, presenting himself under the name of Youssef Abou Al-Majed, claims to be eager to do battle, but claims to have received no order to this effect.

Further east, along the front line near Minbej, another possible target of a possible Turkish operation, pro-Turkish fighters were scattered without any heavy equipment, according to an AFP correspondent on the spot.

In some areas, there were not even any combatants visible, and in others, rebels were inside their camps.

Russia, an ally of the Syrian regime of Bashar al-Assad, like Iran, sent reinforcement troops this week to the Tal Rifaat area.

And the United States urged Turkey - their NATO ally - not to carry out an offensive in Syria at the risk otherwise of compromising the gains of the war against the jihadists.

Washington supports the Syrian Kurdish forces who managed to dislodge the Islamic State jihadist group from large parts of Syrian territory in 2019.

If pro-Turkish fighters "do not have the green light from Turkey, they cannot act alone", Youssef Abou al-Majed told AFP. "And if Turkey does not have the agreement of the Americans, Russians and Iranians, it cannot launch its military operation."