In Roubaix, disabled and able-bodied children welcomed together in a crèche 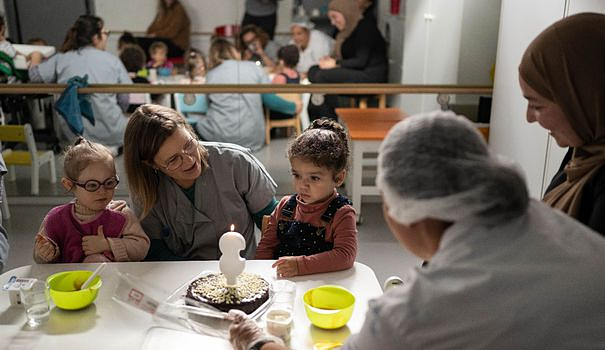 Dinette, construction games, toy cars, motor skills mats... Bathed in light, this nursery in the North, from the "Rigolo comme la vie" network, looks like any other.

Bérénice and Hippolyte listen to nursery rhymes, Kyllian and Diane wake up from their nap and Lara asks for her mother.

Aydine, two years old, with multiple disabilities, is installed in an adapted seat, in the middle of other children who hand him toys that he likes to throw in a crate.

"It's a group, we don't split children with disabilities and those who are not, and the cohabitation goes well like any structure," says its director, Marie Guyot.

The care is carried out in the living room to "melt what is particular in their daily life" and that their day "resembles those of all the other children", explains the director.

"The entry point is to look at the child not in what he is physically, but in his basic needs, the bond of attachment, self-esteem, living together, socialization..." , adds Jérôme Obry, general manager of this network of crèches.

For children with disabilities, "the community is beneficial, stimulating, they will develop their social interactions there, it can help them progress", according to the director of the establishment, one of the few in France to offer this reception.

It is also "beneficial for all children who are from an early age in living together, it develops the capacities of empathy, tolerance, mutual aid".

"Between the children, the exchanges are natural, there is no sidelining, they are interested and encourage each other", testifies Chloé Regolle, host. "They challenge each other, because the friend gets there, we want to get there too, we want to play with the others".

"Toddlers cannot be discriminating, they do not yet have a look forged by an awareness of physical or behavioral norms, everything is normal for a toddler", explains psychologist Sylviane Giampino, specialist in early childhood , vice-president of the High Council for the Family.

If this process of inclusion takes place later, when they start school, "the children are already normalized in their outlook": then "a base of strangeness" sets in which can "insecure" the children, at the risk of provoking "inappropriate attitudes" and establishing a "distance" between them, explains the psychologist.

This crèche, created in 2010, welcomes 25 children from 10 weeks, including eight with multiple disabilities, who can stay there for up to six years, supervised by nine adults.

Getting a place there was a "relief" for Amina Chebab, 27, mother of three-year-old Leyna. She salutes the "support" given to the parents. "When I drop her off, I'm calm, I know that the team will know how to take care of her in relation to her special case".

The inclusion of children is also "a wonderful opportunity to support families" to fight "against the terrible isolation of parents who have a different child", underlines Sylviane Giampino.

Access to the community is a right for all children, but parents are struggling to find a place.

"There is human resistance to inclusion with the fear of professionals not knowing how to do it", but "the real resistance is regulatory, we need staff in the reception methods that are decent" but there is a lack of staff, regrets Ms. Giampino.

However "in the long term and on the whole of society" it is "an investment that is really worth it", she believes. Early inclusion is "a great tool to prepare a non-discriminatory society".