In Rio, the "Brazilian Miami" bastion of Bolsonarists 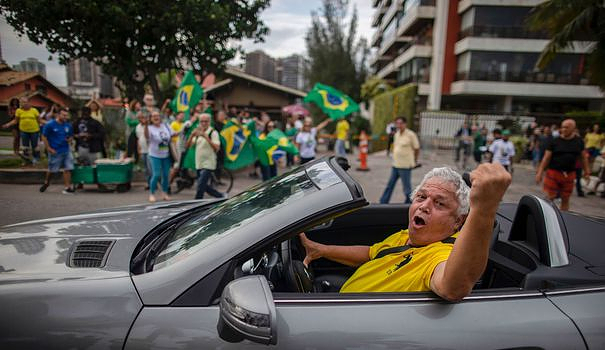 Nicknamed the "Brazilian Miami", Barra is known for its luxury apartments, its ultra-secure neighborhoods, its modern shopping centers, its business towers and its beaches that hem the ocean as far as the eye can see.

If at the scale of the city of Rio, Jair Bolsonaro beat the left-wing candidate Luiz Inacio Lula da Silva 47% against 43% in the first round, here the gap widens: 50-37.

"In Barra, people are ideologically very close to Bolsonaro, most defend him, because there are a lot of businessmen here," Felipe Fontenelle, 58, an economist and business owner, told AFP. communications security and partner in two restaurants.

Designed in 1969 by urban planner Lucio Costa, who designed Brasilia with Oscar Niemeyer, the district resembles the modernist capital with its wide expressways, lush tropical gardens and the automobile as the means of transport par excellence.

From the 1980s, Barra da Tijuca established itself as the place of residence of many celebrities, politicians, businessmen and members of the Brazilian wealthy class, all of whom came to take refuge in its ultra-protected residential complexes. .

Its growth was crowned by the construction of the Olympic park and village during the Rio-2016 Games and by the extension of the metro line.

"It's a district of new rich, mainly people who believe in the idea of ​​the self-made man, that by working, they will succeed," sociologist Paulo Gracino Junior, professor at the Candido Mendes University.

Son of an army staff colonel, Felipe Fontenelle supports Jair Bolsonaro for his economic policy but also because of his aversion to "communism".

"My father had already warned in 1989 - when Lula was a candidate for the first time -, I say it in my turn: a new government of the Workers' Party would be harmful for Brazil", he prophesied.

It was in one of the private complexes by the sea that Jair Bolsonaro and his family moved to at the end of the 2000s, when he was still only a deputy and divided his week between Rio and Brasilia.

"He's my friend. We all know him very well here," says Cacalo Matarazzo, showing several photos of him alongside the president on his phone.

"It's not about Bolsonaro per se, but about supporting a man who fought to make Brazil better," says the 73-year-old lawyer and jiu-jitsu instructor who lives in a nearby building in the neighborhood. closed Vivendas da Barra, where the Bolsonaro family house is located.

Barra da Tijuca, where according to the last census (2010) more than 135,000 people live, brings together "businessmen, members of the liberal professions, high-ranking soldiers and also criminals", like the former -police officer now incarcerated, Ronnie Lessa, accused of having executed city councilor Marielle Franco in 2018 and who was a neighbor of the Bolsonaros, recalls Paulo Gracino Junior.

The president's condominium is protected by a concrete wall, barbed wire and a security gate that controls the entry and exit of vehicles. Since 2018, it has been a place of pilgrimage for Bolsonarists.

Retired lawyer Mirian Rebelo, 65, and her son Rodrigo, a 41-year-old dentist, stop in front of the entrance to the closed neighborhood to take a picture.

Originally from Santa Catarina (south), they are in Rio for a conference and are staying in a nearby hotel. "The president puts a lot of emphasis on the family. And he does not use half-words (...) he says what he thinks", welcomes Mirian Rebelo, colored brown hair, big black glasses and T branded t-shirt.

"He fights corruption and evil ideology. Every country deserves a Bolsonaro," adds his son.

In addition to Brazilian flags, the store opposite sells dolls of Lula dressed as a prisoner. “Thief, scoundrel”, launches the Bolsonarist Cacalo Matarazzo looking at them.