As Qatar prepares to welcome more than a million fans for the FIFA World Cup, the Al-Shahaniya track, 40 kilometers east of the capital Doha, still seems far from the fever that invaded the emirate. 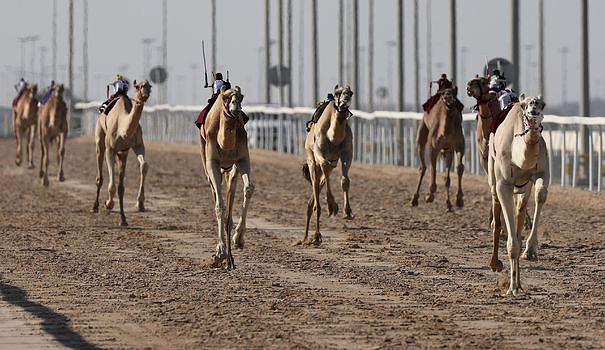 As Qatar prepares to welcome more than a million fans for the FIFA World Cup, the Al-Shahaniya track, 40 kilometers east of the capital Doha, still seems far from the fever that invaded the emirate. Nasser prefers these "Arabian camel" races.

The enthusiasm and the cries of the commentator of the race, broadcast on a giant screen, however recall the atmosphere of the World Cup, as if he borrowed the codes of football to describe the competition.

Until the beginning of the 21st century, children rode camels, but the practice was declared illegal at the end of 2004 and they gave way to remote-controlled mechanical jockeys.

In their cars, trainers remotely operate the robots' mechanical whip, which prods the animal, and encourage it by shouting into a walkie-talkie.

Nasser al-Marri is a "moudhammer". He supervises the daily routine and training of the mounts and remotely guides them during competitions.

"The dromedary is part of us, it's our main passion, the number 1 sport in the Gulf", enthuses the 23-year-old man, even if football is also very followed by the Qataris.

Nasser and three other "moudhammers" are eagerly awaiting the start of the World Cup on November 20.

In the back seat of their vehicle, phone in hand, Ahmad Ali, 21, shows a video clip of a race organized on the Al-Shahaniya track for PSG, a Parisian club owned by Qatar.

"I hope that Neymar will come back with the rest of his Brazilian teammates and that other teams will come to discover our national sport", he says.

Abdallah Hafiz, also 21, hopes fans too will "discover the sport of our ancestors".

Ali al-Marri, 66, sips an Arabic coffee in a small cafe near the track and says he "learned this sport from (his) father". "Today, I am retired. This sport is expensive but camels are my life," he said.

He adds: "Football doesn't concern me. For me, only running is a sport. And when I'm next to my mount, I feel like the world belongs to me".

In one of the many nearby farms, the owner of the estate drinks a cup of tea in front of a plate of dates.

Abdallah Hafiz, 52, confirms that camel racing requires a lot of money but also effort and perseverance.

The cost is not limited to the purchase price of the animal, which starts at 10,000 dollars, but also includes its training and maintenance, amounting to at least 1,500 dollars per month and per camel, he explains.

However, if the mount achieves victories, "its price has no limit and can reach a million dollars or more", according to him.

While betting is banned in the country, competitors compete for high-value prizes, usually awarded by the ruling family that sponsors the traditional sport.

Beside Mr. Hafiz is installed his nephew Mohamed, 27 years old.

For this former football player, the two sports share common points: they require both physical and mental effort and involve "training throughout the week, a well-defined diet, medical monitoring and great attention" .

Two decades ago, the jockeys of racing dromedaries were children, sometimes very young, from poor countries. The lighter they were, the greater their chances of winning.

But because of fatal accidents and the greed of some parents who deprived their children of food, the Gulf countries bowed to international pressure and banned the practice.