In old Damascus, a "nose" recreates the greatest perfumes

For this fifty-year-old "nose", it is enough to smell, once, a bottle of an imported perfume to reproduce it and sell it at a much more accessible price. 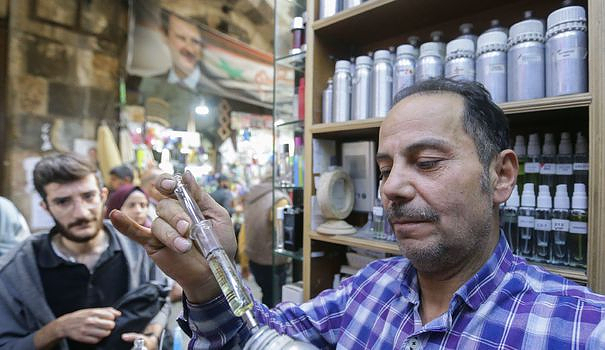 For this fifty-year-old "nose", it is enough to smell, once, a bottle of an imported perfume to reproduce it and sell it at a much more accessible price.

"I don't have a big workshop, but I have more essences than a big factory in France, and I have this nose that I've been training since I was 15," says this little man with a mustache. , nicknamed Abu Nour.

His trade, which he inherited from his maternal uncles, has been passed down in the family for a hundred years, and he is now teaching it to his son who assists him.

Located in an old caravanserai, between the spice souk from which the scent of cinnamon and cardamom escapes and that of incense, his tiny shop, which cannot accommodate more than three customers at a time, is always full.

Some show him on their phones images of imported perfumes that they ask him to imitate, others want to buy the fragrance that the perfumer advises them.

Cham al-Falah, 24, came to ask her to compose for her a perfume similar to the American brand to which she was loyal.

"Perfume for young girls is something essential, it's like eating or drinking," says this young management graduate, elegant under her cream veil.

"Previously, I bought foreign perfumes, but I can no longer afford it, and besides, imported products are more and more inaccessible in Syria," she explains.

While Damascus, the capital, was largely spared the war in Syria sparked by the crackdown on pro-democracy protests in 2011, the economy across the country has been battered by a decade of fighting and heavy international sanctions.

On the parallel market, the Syrian currency has since lost almost 99% of its value and the average salary of an employee is now only worth around 25 US dollars.

A bottle of imported perfume today is worth at least a hundred dollars.

But Mohammad al-Masri prides himself on being able to recreate the most luxurious perfumes almost identically, and sells them for less than 30,000 pounds, or about six dollars.

In his shop, customers take their time, smelling the dozens of vials, or watching him juggle with the essences.

His son brings him the bottles from a nearby warehouse.

On a rectangular table, Abou Nour has lined up dozens of vials: the essences of jasmine rub shoulders with those of Damask rose or musk.

And he lined the wall behind him with photos of the perfumes of the world's major brands, cut from old magazines.

Some loyal customers come from afar, like Ahmad Dorra, who traveled 50 kilometers from the mountainous town of Zabadani to buy five vials of perfume for his family.

"I don't know much about perfumes, but I trust Abou Nour's nose," says this peasant, his head covered by a red checkered keffiyeh.