In Okinawa, the allergy to American bases put to the test by tensions with China 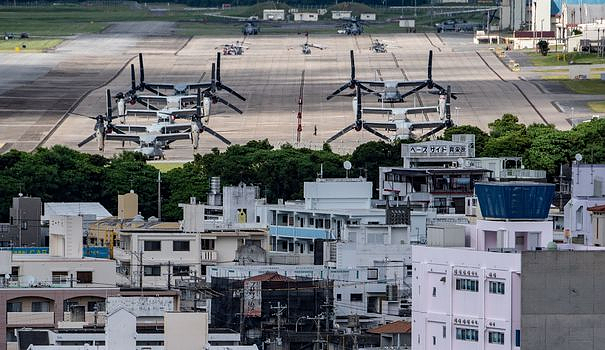 "Okinawa is overburdened by an excessive burden" compared to the rest of the country, Ryo Matayoshi, 39, elected to the city council of Ginowan, on the main island of Okinawa, told AFP.

But "if you think about the security of Japan and East Asia, the presence of bases in Okinawa is inevitable," he adds. "Many of our generation see this reality," he said.

Chinese missiles fell near Okinawa in early August during Beijing's military exercises in response to US House Speaker Nancy Pelosi's visit to Taiwan.

This incident and the Russian invasion of Ukraine "intensified the perception of a threat and it probably reinforced support for the presence of the bases in Okinawa", estimates Yoichiro Sato, professor at the Ritsumeikan University of Asia- Pacific, specialist in foreign and security policy issues.

Allergy to any military presence is however on edge in Okinawa.

Formerly an independent kingdom, the archipelago was annexed at the end of the 19th century by Japan, which used it to slow the progress of American soldiers during the Second World War, at the cost of significant human sacrifices: a quarter of the population perished during the Battle of Okinawa in 1945.

Okinawa was then occupied until 1972 by the Americans, who maintained a strong military presence there under the Japanese-American Mutual Security Treaty, the cornerstone of Japanese defense.

Opposition to the American military presence crystallizes around the relocation of the Futenma air base, right in the center of the town of Ginowan. The government wants her moved to Henoko, further north.

Futenma, sometimes called the "most dangerous base in the world", has been linked to numerous accidents, including the crash of a helicopter on a university building in 2004 or the fall of a porthole in the courtyard of a primary school. in 2017.

But Okinawans have mostly been outraged by violent crimes, such as the abduction and rape of a 12-year-old girl by three American soldiers in 1995. Between 1972 and 2020, the department recorded 582 cases of violent crimes, murders, sexual violence or armed robbery attributed to US military personnel.

"The anti-base movement is already old" but regularly invigorated by such crimes, explains Suzuyo Takazato, local politician and pacifist activist of 82 years, also referring to the noise pollution and environmental pollution linked to the bases.

Behind the re-election at the beginning of September of the governor of Okinawa, Denny Tamaki, anti-base, hides in fact a slow progression in the local elections of the candidates supported by the Liberal Democratic Party (PLD, nationalist right) in power in Japan.

However, according to a survey by the daily Asahi in early September, only 32% of Okinawa residents considered the issue of bases a priority, compared to 42% in 2018 and 45% in 2014.

The economy was the top concern in Okinawa, the poorest department in Japan where the child poverty rate is twice the national average, and very dependent on tourism, which has suffered greatly from the pandemic.

The sometimes openly anti-Chinese rhetoric of the PLD and its desire to boost the national defense budget would also bring votes to the local candidates it supports.

Forgetfulness and resignation also play a role, according to Ms. Takazato.

"They are part of the landscape", she underlines, "there have been bases in Okinawa for 77 years now, that is to say three generations who have grown up with this presence". Some "think that we can't do anything about it, that we have no other choice but to accept them", she regrets.

"The reality is that we are becoming good neighbours," said Ginowan city councilor Ryo Matayoshi. "US soldiers participate in clean-up operations or traditional celebrations with locals" and some Okinawans "count soldiers among their friends."

"The feeling of aversion gradually fades," he thinks.