In North Macedonia, a village without inhabitants but with many books

The collection of 20,000 works is transmitted in his family from generation to generation. 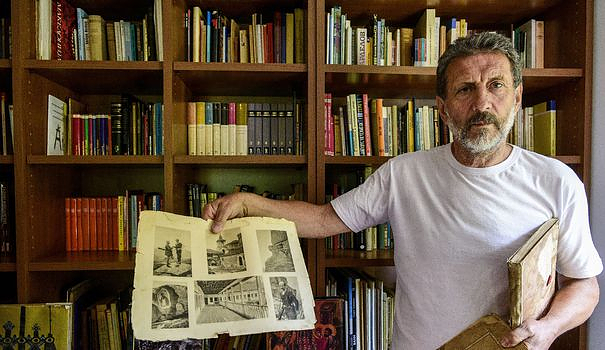 The collection of 20,000 works is transmitted in his family from generation to generation. It was Stevo Stepanovski's great-grandfather who launched the tradition towards the end of the 19th century after receiving books from the hands of Ottoman soldiers passing through this isolated valley in the south-west of the Balkan country.

The library contains historical texts on what is now North Macedonia, novels in the local language, volumes in Farsi, Arabic and Turkish as well as works in Serbo-Croatian.

The collection located in a multi-centenary stone house is completed by the original photographs of a journalist who covered the First World War, old maps and dictionaries on the multiple languages ​​of the region.

Stevo Stepanovski, 72, has watched over the site for decades and offers his visitors glasses of rakiya, the fruit alcohol very popular in the Balkans.

"Here is the village of enlightenment and education," the retiree told AFP.

According to him, the locality has long benefited from the library and the village has produced a large number of teachers.

“There was no house without a teacher,” he says. But the library is also accused of having partly caused the loss of Babino.

In the 1950s, the authorities of the country which then belonged to communist Yugoslavia had enlisted the teachers of the village for a vast literacy campaign, which had in fact deprived the place of a good part of its population.

As in all this poor region of south-eastern Europe, North Macedonia is undergoing demographic erosion fueled by a low birth rate and the massive exodus of its inhabitants. In the countryside, a large number of villages are now uninhabited.

Babino was particularly affected. Only three permanent residents remain of the 800 people who once lived there.

Stevo Stepanovski, whose own children have cleared out, is irreducible. However, he is rarely alone since he welcomes between 3,000 and 3,500 visitors to the library each year.

They often come from neighboring towns and villages or from countries in the region, but some curious people come from Brazil, Egypt or Morocco, in addition to dozens of researchers and intellectuals.

"I am surprised to find books here that cannot be found in urban libraries," says Goce Sekuloski, a music teacher from Skopje who visited the site recently after hearing about it from friends.

To perfect the atmosphere, the guardian of the temple has built a small amphitheater for conferences and concerts.

"We offer peace of mind to people who come here to experience the atmosphere. Here is the perfect place (...) to discover the magic of a book", says the retiree.