In Nièvre, farmers refuse to live in the shadow of agrivoltaism

"We do not want to be the auxiliaries of solar energy": for Sylvain Ratheau, breeder, agrivoltaism is a decoy. 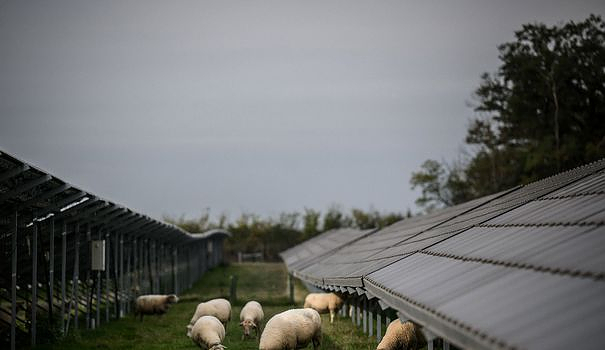 "We do not want to be the auxiliaries of solar energy": for Sylvain Ratheau, breeder, agrivoltaism is a decoy. Strongly encouraged in the renewable energy acceleration bill, which will be examined by the National Assembly on December 5 after passing through the Senate, the installation of panels on the fields is part of the government's plan to multiply by ten the production of solar energy by 2050.

This very ambitious objective leads to "anarchic development which transforms the countryside", accuses Mr. Ratheau. "We want to be quick so we put panels and we see what we put underneath", says the breeder, sweeping with his hand a field of cereals of 76 hectares in the middle of which 22 ha of panels must be installed.

This project, located in Germenay (Nièvre), has just passed the public inquiry stage. The prefect has until January 20 to approve it or not.

"Here, we will stop growing cereals to make fodder", more compatible with the installation of panels. "Where is the interest? It's maintenance, not real agricultural production. We are farmers, not landscapers under the panels", challenges Mr. Ratheau, former departmental spokesperson for the Confédération paysanne union ( 20% of farmers in Nièvre).

For him, renewables are "just a pretext to make money". According to the developer of the Germenay project, the Danish European Energy, the owner of the land rents them to this company "under 1,000 euros" per year per hectare, against 100 to 150 euros per hectare per year if he entrusted them with rent. .

In addition, he will still receive 1,000 euros per year per hectare for the maintenance of the floors located under the panels, which are less profitable. These approximately 2,000 euros are added to the income he will derive from the fodder produced.

"Agrivoltaism is all about profit", confirms Cécile Benoit d'Azy, who rents her 70 ha of land to the Photosol company, in Verneuil, where the first agrivoltaic field in Nièvre was installed in 2017. "My husband, a farmer, was retiring with only 1,000 euros per month. A solution had to be found: with agrivoltaism, we receive 70,000 euros per year, and over thirty years".

This photovoltaic jackpot has caused a multiplication of projects in Nièvre: in this very rural and poor department, nearly sixty files are under study, for an area close to the 2,000 ha targeted by the Chamber of Agriculture.

To do this, it introduced in 2021 a "supervised development", unique in France, which imposes "annual monitoring to verify that there is indeed agricultural production", explains Didier Ramet, the president of the Chamber.

In addition, so that "all farmers benefit", according to Mr. Ramet, the developer must pay each year 1,500 euros per megawatt produced to the Grouping for the use of agricultural financing of Nièvre (Gufa), a kind of "investment fund". investment", made up of the Chamber and the agricultural unions.

According to Mr. Ramet, this financial windfall, which should reach 3 million euros per year, must finance "collective projects" useful to farmers. However, these remain to be defined.

In addition, the electricity producer must pay "agricultural compensation", intended to compensate for the drop in yield. For the Germenay project, for example, European Energy will give 170,000 euros, divided between the Cooperative for the use of agricultural equipment (Cuma) of Nièvre and Gufa.

"It's just to make money", concludes Aline Bauman, fruit producer in Saint-Pierre-Le-Moûtier who is fighting against a 50 ha agrivoltaic project opposite her home.

Denouncing a "diversion" of agricultural land, the Peasant Confederation demands that the panels be installed on existing buildings as a priority.

"In the Nièvre, there are 3,000 ha of buildings and car parks. It's more than enough", points out Sylvain Ratheau.

An opinion supported by the Young Farmers union (JA, 30% in Nièvre). "Agrivoltaism would further increase the price of agricultural land to the detriment of the installation of young people", judges its co-president Simon Gauche.

"The cost of production is twice as high on buildings", answers Antoine Dubosc, director of development at Photosol, which installed the first agrivoltaic project in Nièvre, in Verneuil (70 ha).

For him, the opposition of "certain" peasants feeds on a "fantasy": "France is not going to cover itself with signs".

According to the Ministry of Ecological Transition, it would take 30,000 ha in France to achieve the objectives, i.e. barely more than 0.10% of the useful agricultural area.

"No, our sheep are not alibis," assures Mr. Dubosc, showing the sheep grazing on the thick grass under the 398,000 solar panels in Verneuil.

"The interest is undeniable", confirms Emmanuel Mortelmans, the breeder who grazes his 1,000 sheep under the "shelves".

"From 2015 to 2017, with the warming, we had no more grass. We were at the end of the line": the shepherd then contacted Photosol who agreed to open the 70 ha under the panels for free. "Without that, we would have had to sell part of the herd".

"We do not want to see the Nièvre covered with panels", assures Emmanuel Bernard, president of the FDSEA union (30% of farmers in Nièvre). "But we are not destined to remain poor".