In Nice, the Ukrainian community celebrates independence six months after the start of the war

"It is all the more important to celebrate this holiday since this year, we are not holding rallies in Ukraine because we are afraid of the bombings", noted Irina Bourdelles, a Ukrainian resident who leads the Franco-Ukrainian Association Côte d'Azur (Afuca), organizer of the event, with AFP. 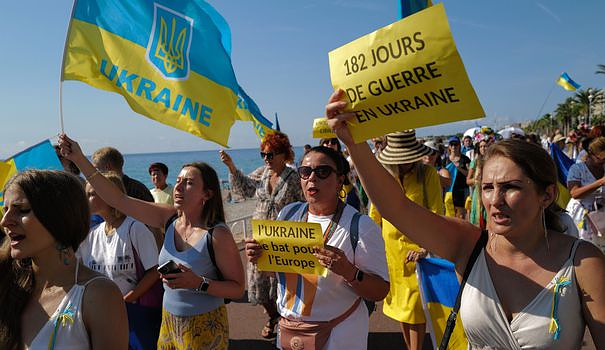 "It is all the more important to celebrate this holiday since this year, we are not holding rallies in Ukraine because we are afraid of the bombings", noted Irina Bourdelles, a Ukrainian resident who leads the Franco-Ukrainian Association Côte d'Azur (Afuca), organizer of the event, with AFP.

This Independence Day comes in a context of high tension, Ukraine fearing possible "repugnant Russian provocations". kyiv authorities have banned all public gatherings from Monday to Thursday in the capital, and in the northeast the governor of the Kharkiv region has ordered a curfew from Tuesday evening to Thursday morning.

In Nice, 350 people, according to the police, including a large majority of women and children, marched for more than an hour on the five kilometers of the famous Prom seafront, gathered behind a huge banner of 15 meters long in the colors of their country, blue and yellow.

Many people were waving flags or holding balloons, some with placards castigating "dictator" Putin and labeling Russia a "terrorist state", and others chanting anti-Russian regime slogans calling for "the 'isolate".

"Modern Ukraine has existed for thirty-one years and it is only now that we are beginning to understand the price of independence", noted Artem, 36, who wished to remain anonymous, working for "a strategic company". from Ukraine.

The parade ended with the Ukrainian national anthem taken up in chorus by the participants in front of the Théâtre de Verdure where a market and a concert for charity are to be held in the evening. The Afuca association hopes in particular to transport medicines to a pediatric hospital in the country.

According to the latest figures communicated to AFP by Didier Leschi, director general of the French Office for Immigration and Integration, the Alpes-Maritimes department was hosting some 9,000 Ukrainian refugees on August 23, for a national total exceeding now the 100,000 people six months after the start of the conflict.