In New York, Pap Ndiaye criticizes the "traces of anti-Americanism" in French politics 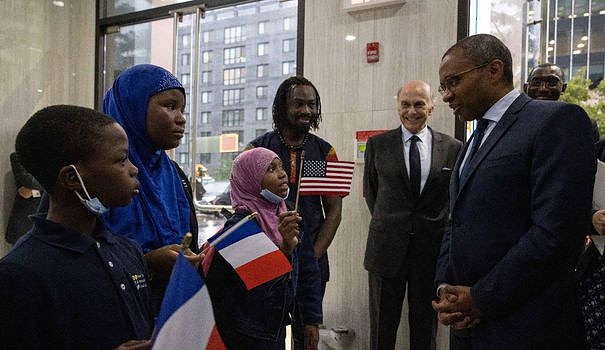 He visited two schools in New York, the very exclusive French private high school in Manhattan and a new school with a bilingual French-English curriculum in the Harlem district, where African-American and East African minorities live. French-speaking West.

At the French high school, Mr. Ndiaye spoke at length with students who asked him about his career which led him, in his own words, to become the "first black Minister of National Education and also having African ties ".

Pap Ndiaye, 56, born near Paris to a French mother and a Senegalese father, is an associate professor and doctor of history, a former student of the Ecole Normale Supérieure, a specialist in the history of minorities, particularly African-Americans, in the United States. United States and studied at a university in Virginia.

His entry into government in May sparked a number of political comments and an outcry from the far right: the National Rally called him a "racialist militant" and Reconquest! of Eric Zemmour accused him of being "charged" by Emmanuel Macron "to deconstruct the history of France".

The minister acknowledged that being the first "black" Minister of National Education in France had a "symbolic dimension".

"But it does not sum me up. I also think I have skills, intellectual and academic knowledge to fulfill the missions of this ministry, at best," he defended himself.

According to the French Embassy, ​​30,000 students in the United States benefit from a bilingual program in public schools, making it the first in the world of this type for French cultural cooperation abroad.

“It is very important that French, historically associated in the United States with the elites of the East Coast, be represented by a school such as NYFACS in a working-class neighborhood where African-American families and West African families live,” s rejoiced the minister.