"In my job we always make people happy"

Thomas Salzig carries his passion on his right forearm: the bell-shaped blossoms of the columbines, the lucky clover leaves and globular clover blossoms, the herbaceous buckhorn. 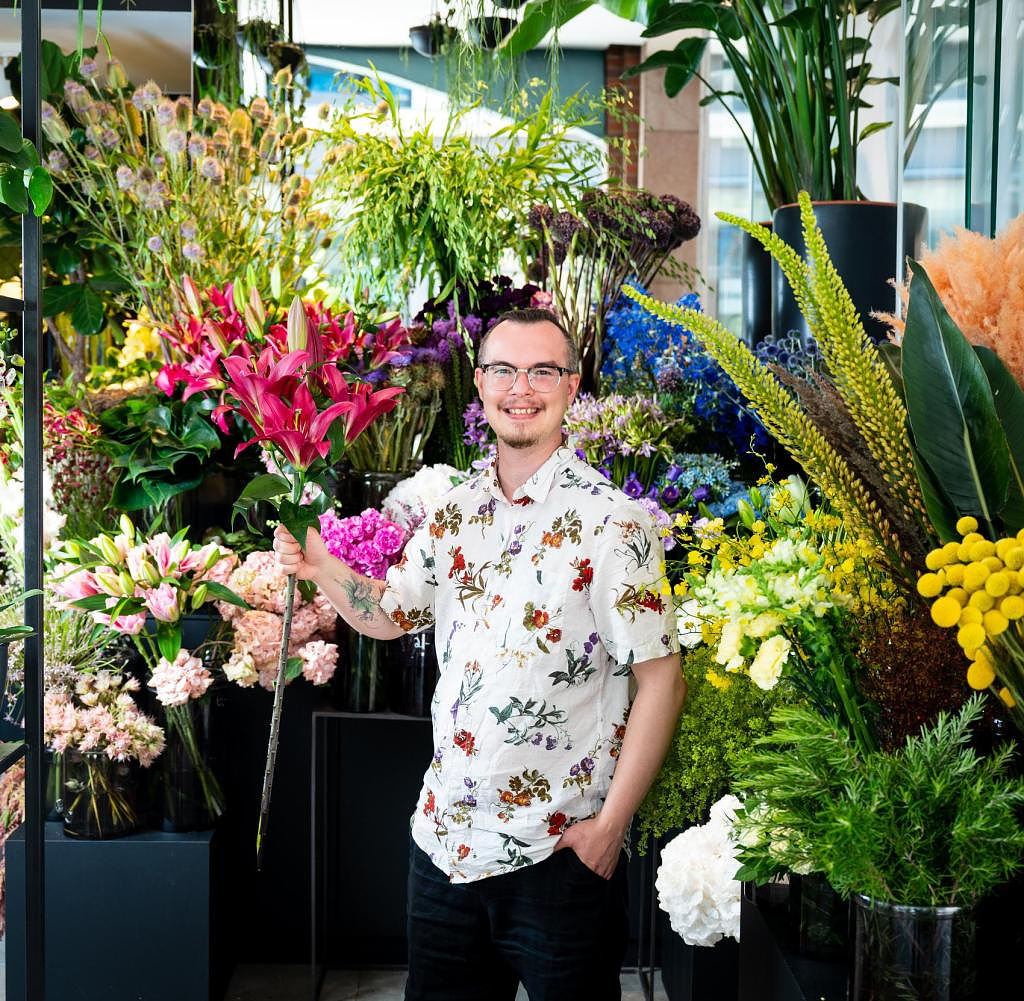 Thomas Salzig carries his passion on his right forearm: the bell-shaped blossoms of the columbines, the lucky clover leaves and globular clover blossoms, the herbaceous buckhorn. "Just all that forest and meadow stuff," says the 29-year-old. Thomas Salzig is a florist and not only that. He is also a state-certified designer for floral art, trained at one of the most renowned master schools in the country in Weihenstephan.

Tied flowers are no longer called bouquets, but workpieces. And they are not created in seven minutes, the average time that florists calculate for a bouquet in the shop, but also in six to seven hours, at least when it comes to masterpieces.

Like next Saturday in Berlin. Thomas Salzig competes against eight other state winners at the German Florists' Championship. The finalists then have to make four workpieces, they can prepare three, and one will be a surprise work. All four are said to have the theme of "freedom" as their motto, a task that causes a bit of a headache even for flora lovers. Thomas Salzig, however, knows tasks of this kind and also all sorts of secrets from the world of bouquets.

"At the master school, the very first work we were supposed to do was depict 'wind' and only with materials that we can find in nature," remembers Salzig. This also led to confusion for him, the trained florist. The result was sobering. "It was only later that the teachers showed us what possibilities there were with our pieces," he recalls.

A lot has happened since then. Naturalness is the most important thing for Salzig in his creations today. He definitely hits a nerve with the times. Cultivated flowers in artificially put together bouquets are a thing of the past. Today, bouquets of flowers should look like they have just been picked from the roadside.

Salzig looked for a job all over Europe after graduating with a master's degree with a grade of 1.1. By chance he discovered the job offer of Stefanie Kehr in a trade journal, who runs three other branches in Blankenese, Eppendorf and in the city center in addition to the branch in Nienstedten. Salzig accepted with a kiss, because well-trained, talented, technically skilled and creative florists are becoming increasingly rare.

Only twelve trainees took the exam in Hamburg this summer, and ten of them passed. "30 years ago there were still an average of 100 every year," remembers Michael Kaiser, florist from Hausbruch and head of the Hamburg regional group of the Association of German Florists (FDF). Kaiser's association represents 200 specialist companies. There was more of that too.

And as in so many industries, it is difficult to find trainees. "It's a hard job with long working hours, which is also physically demanding," says Kaiser. With a gross salary of 1,600 euros as a journeyman and 2,500 euros as a foreman, the pay is not exactly lavish. And yet the job opportunities are good, as are the design options, creativity and courage.

“Those who work as shop managers like Thomas also have more leeway when it comes to salary negotiations,” says Stefanie Kehr, who has shown courage with her four shops. At the same time, she also offers her floristry via an online shop. "Selling a bouquet of flowers just doesn't work anymore, you have to position yourself more broadly," says Kaiser.

Thomas Salzig never gave up his passion for flowers and plants, grass and blossoms. He had discovered it for himself through his aunt, who took care of the floral decorations at family celebrations and other occasions. At 15 he did an internship in a flower shop. From then on, his career aspirations were clear. "Even the boss had strongly advised me not to do this," remembers Salzig. Undeterred, he dropped out of high school after the tenth grade and started looking for an apprenticeship.

"But I didn't have a chance when I was 16 because the working hours collided with the Youth Protection Act," recalls the 29-year-old. And because he also toyed with the idea of ​​growing fruit and vegetables - "I find it fascinating and I'm a big fan of kale, it tastes good and looks great." - he went on to do a technical degree in agriculture and ornamental plants. After that, it worked out in his home town of Cologne with the florist training, which he completed in 2015, followed by the master training.

In the meantime he has settled completely in Hamburg, lives in a small apartment in Barmbek and likes to roam through forests and meadows in his free time. "I always have a pocket knife in my backpack so I can cut off the grass and flowers that grow there unnoticed by many." He dislikes anything artificial, and not just for aesthetic reasons. Dyed flowers like pink amaryllis around Christmas time require enormous effort - and chemicals.

“I think we, in particular, have to be careful with nature,” says Salzig, demanding respect for the flower product. "We florists spend an awful lot of time making them look the way customers want them to look," he says. It is precisely this respect that is lacking in discounters. "At the beginning of the week they put the bouquet of roses in a bucket and don't look at it for the rest of the week, the flowers look like that after a few days," he says. However, Salzig also knows about the demand for the bunch of flowers, which are usually also cheaper.

The industry has been changing for years. Specialist companies are becoming rarer, but more exclusive, while shops with simple bundles are booming, a development that FDF country manager Kaiser is not particularly worried about. "Specialist companies and discounters can coexist well because they serve different segments," he says. A few years ago, Blume 2000 in Hamburg began training florists, but stopped doing so again with Corona.

Now unskilled people can also sell gladioli, cat grass and moss roses there. "We florists are affiliated with the Chamber of Commerce, not the Chamber of Crafts, so anyone can open a flower shop," explains Kaiser. Nevertheless, he is optimistic about the future. “We florists too have to face up to change and recognize trends,” he says. In the past, florists would present ideas and suggestions to customers, but now customers come to them with photos of influencers for special orders. "We have to be able to react to that," says Kaiser.

Thomas Salzig is undeterred by all of this. For weeks he has been preparing for the German championship in a small room in a nursery. Of course he wants to do well, to convince the judges of his creativity and his technical skills. But what counts most for him is the love of flowers.

Maybe one day he wants to pass it on as a teacher at the master school. For now, however, he will remain a florist – and a seller. "In my job we always make people happy and we usually accompany them in all phases of life because flowers are part of life."

‹ ›
Keywords:
TexttospeechHamburgPflanzenzuchtAusbildungsberufeFloristikKarriereThomas SalzigStefanie KehrBleichenbrückeKaiser VerbandWeihenstephanFloristMichael Kaiser
Your comment has been forwarded to the administrator for approval.×
Warning! Will constitute a criminal offense, illegal, threatening, offensive, insulting and swearing, derogatory, defamatory, vulgar, pornographic, indecent, personality rights, damaging or similar nature in the nature of all kinds of financial content, legal, criminal and administrative responsibility for the content of the sender member / members are belong.
Related News