In Libya, the ordeal of migrants turned back with European aid

When Godwin wanted to reach the Italian coast aboard an inflatable boat, Libya was in the middle of a civil war. 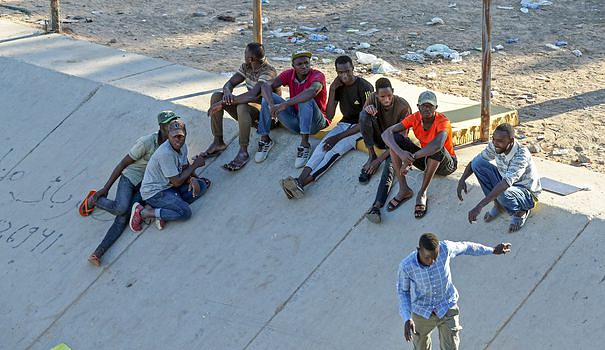 "We were 60" from Zaouia, near Tripoli, told AFP this occasional daily worker. "It was dark and I did not know the exact destination," continues Godwin, hat and t-shirt spotted with paint.

Like most, he clings to a romanticized image of the Old Continent: "I just wanted to go to Europe and have a good life". But Godwin is aware of the risks: "I told myself that if I survived it would be thanks to God and if I died it would be according to his will".

The perilous journey in the Mediterranean turns into a nightmare: "seeing a Libyan boat arrive with armed men on board, I thought I would jump into the water. I did not want to return to Libya".

"They brought us back. I was imprisoned and 3,000 dinars (550 euros) were demanded from my family. They paid the ransom and I was released," recalls Godwin, who wants to start over as soon as possible.

Houssein "tried to reach Europe by sea in 2017", confides to AFP this Sudanese who is also waiting under a bridge to be hired on a construction site for 10 to 20 euros a day.

Pushed on the migratory route by misery, this 26-year-old refugee set off "in the middle of the night" on a boat intercepted shortly after by the coast guards. "I was imprisoned for 28 hours before fleeing," he says.

Like Godwin and Houssein, tens of thousands of migrants and refugees try to reach Europe each year but fall prey to traffickers, when they don't die at sea.

Since January, around 13,000 people who have tried to cross the Mediterranean have been brought back to Libya, and for some imprisoned, according to the International Organization for Migration (IOM), which also reports 206 dead and 712 missing.

Detained "arbitrarily and systematically" in Libya in centers controlled by armed groups or traffickers, migrants are victims of "murder, enforced disappearance, torture, reduced to slavery, sexual violence, rape and other acts inhuman", according to a survey published at the end of June by the UN.

This does not prevent the EU from financially supporting local coastguards to curb arrivals on its coasts.

At the beginning of August, Human Rights Watch (HRW) accused the European border agency Frontex of supporting, using drones in particular, "the efforts of the Libyan forces to intercept the boats" of migrants despite "overwhelming evidence of torture and operating".

On social networks, many migrants stranded in Libya denounce this European aid. "We live in fear, tortured by European taxpayers' money," laments the "Refugees in Libya" account on Twitter.

Alarm Phone, an NGO that runs a hotline for migrants in difficulty, says in a report in mid-August that it has "witnessed a policy of non-assistance countless times, with the abandonment of boats threatening to capsize in the Maltese (rescue) area", of which we do not always know what has become of them.

"Instead of having a Europe that pays Libya to stop migration, African countries should take care of their populations so that they do not emigrate", denounces also Houssein.

"If my situation was good, I wouldn't have come here."

The Libyan authorities defend themselves from any violence.

In mid-May, they announced the interception of 3,000 migrants in a few days, of which about 300 were presented to the press seated in good order in a detention center, in front of their wooden boat exhibited for the occasion.

“The arrests are made according to the provisions in force”, had then assured AFP an official of the center.