In Lebanon, residents of a power plant accuse him of killing them slowly

"We may die tomorrow," said Zeina Matar, an energetic 40-year-old brunette, who said she "does not dare to consult" a doctor for fear of the results. 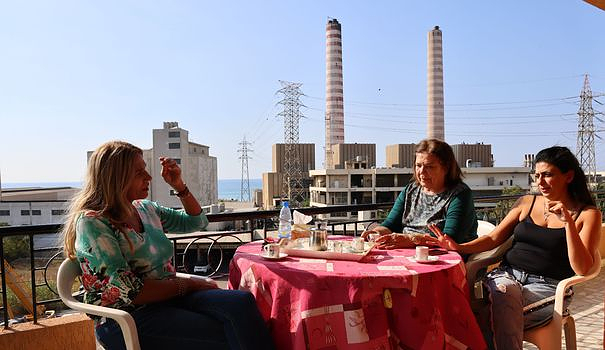 "We may die tomorrow," said Zeina Matar, an energetic 40-year-old brunette, who said she "does not dare to consult" a doctor for fear of the results.

Like many residents of the neighborhood adjoining the Zouk Mikaël power plants, Zeina is going through an ordeal. She now takes refuge most of the time with her husband, in southern Lebanon.

"We have to endure everything, even the noise", without electricity in return, regrets her cousin Rita, 50, sipping her coffee on her terrace, overlooking the plant, which sometimes gives off thick black smoke.

Because due to the collapse of the Lebanese economy in 2019 after decades of corruption and mismanagement, the state is unable to provide electricity for more than an hour a day.

Zouk, a former agricultural town with a Christian majority, about twenty kilometers north of Beirut, has been disfigured by the galloping urbanization of recent decades.

In 2018, a study by the NGO Greenpeace, based on satellite images and the levels of nitrogen dioxide (NO2) in the atmosphere, designated the agglomeration of Jounieh, of which Zouk is a part, as the fifth most polluted in the Arab world and the 23rd worldwide.

The Zouk power station, built in the 1940s, had been singled out by Greenpeace. Also implicated are the monster traffic jams and the private generators on which the Lebanese fall back to compensate for the deficiencies of the State.

To help nothing, the surrounding mountains hold back the emissions, turning the bay into a vat.

"The chimneys of the plant being too low, their emissions collide with the mountains", explains Paul Makhlouf, pulmonologist at the Notre Dame du Liban hospital in Jounieh.

Since 1994, he has made several studies on the phenomenon and expressed his "distress" in the face of the inaction of the authorities.

"When I saw the results, I moved from here, I fled," the doctor from Zouk told AFP.

In his clinic in 2014, the lung problems of residents living around the plant were increasing abnormally by 2.5 to 3% per year.

Today, according to estimates, the annual increase is "5 or even 6%", he is alarmed.

He mentions in particular an annual increase in cancers and skin diseases in adults and respiratory diseases in children.

The fuel oil used is "rich in sulphide and nitric oxide, both carcinogenic, mainly affecting the respiratory system and the skin", explains Doctor Makhlouf.

Like Rita, Zeina is now hanging out her laundry inside, the walls of her terrace being blackened by emissions from the power plant.

"After a few washes, our clothes are perforated (by sulphide), good to throw away," she says.

A second plant supposed to run on gas was built in 2014, "without authorization from the municipality", affirms the mayor of Zouk, Elie Beaino, deploring "the absence of a study on the environmental impact".

Despite his numerous warnings to the various ministries concerned, "nothing has been done".

Today, the old plant only operates for an hour a day, just to supply the country's vital institutions.

But faced with the emergency, the Lebanese State has resorted to poor quality fuel oil.

"We are sometimes awakened by a heavy explosion in the middle of the night", due to the cleaning of heavy fuel oil, deplores Rita's mother, Samia Matar, 80 years old.

"When the fuel oil is spilled, we close the windows, because the smell is unbearable", explains Zeina.

"Most residents are calling for the power plants to be closed," Beaino said.

"Our results in 2018 showed that there were seven times more cancers", in Jounieh than around the campus of the American University of Beirut (AUB), affirms the ecologist deputy Najat Saliba, who participated in the last study dated AUB.

According to the MP, from the protest movement of October 2019, the incomplete combustion of this toxic heavy fuel oil is not appropriate in the city.

While waiting to close the plant, "the solution is to import quality fuel oil and gas", she explains.

At the beginning of September, thick black smoke emanated from the plant after the use of heavy fuel oil, causing an outcry on social networks.

The Ministry of Energy then explained that it had been forced to use this fuel oil in an "exceptional" way to "continue to supply the airport, hospitals and other vital institutions".

Since then, the engineers mainly activate the plant at night, far from the cameras.