In La Teste-de-Buch, the burnt public forest is getting a makeover

“Fortunately, it was not used!” rejoices an ONF employee, showing this forest version of the Atlantic wall (4. 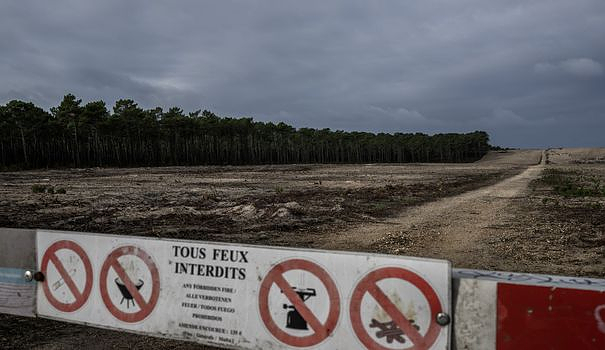 “Fortunately, it was not used!” rejoices an ONF employee, showing this forest version of the Atlantic wall (4.4 km long and up to 300 m wide, from the ocean Cazaux lake), designed as a matter of urgency on the edge of La Teste (Gironde) and Biscarosse (Landes).

The flames stopped a little further north, after covering around 7,000 hectares, the heaviest toll this summer after the Landiras fires (21,000 hectares in two stages), also in Gironde.

In La Teste, the ancestral "user" (private) forest paid the heaviest price, but half of the 2,030 hectares of state forest managed by the ONF burned down, in a coastal sector where the beaches attract around 800,000 people per year.

The large firewall, "unprecedented as these fires were", according to Pascal Laudoueineix, forest technician, will be reduced but it will remain in place, "because the risks still exist: campers who spend the night (illegally), thousands of people in the summer..."

To revive the forest, mainly made up of maritime pines rooted in the dunes, the office is currently extracting the burnt but still healthy and therefore exploitable wood.

"We need to harvest 80,000 m3 of wood as quickly as possible, before spring and the arrival of insects, such as bark beetles, which will finish killing the trees", explains Yann Rolland, head of the wood service at the ONF Landes North Aquitaine. "This volume is what we would have cut over ten years usually".

The ONF will sell this material 15% cheaper than green wood, for an income of around one million euros.

In the forest still closed to the public and partly sparse by the cuts, machines cut down pines, lay them down and cut them into "billons" (logs) of 2.5 m, which are then stacked. Trucks take them to New Aquitaine industrialists who will make paper, pallets or parquet from them, the same products as with intact wood.

"We decide to cut a tree according to the look of the crown (upper part, editor's note)", partially scorched or still very green, "and the height of the burn at the foot", explains Mr. Renan.

"But our goal is to keep as many trees as possible standing and rely on natural regeneration", taking advantage of the next "seed rains" released by the cones, underlines his colleague Fabrice Carré.

Around, a brown carpet of pine needles covered the ashes and green shoots, including strawberry trees, are visible here and there.

Facing one of the two restaurants devoured by the flames in the national forest, between carcasses of chairs and leftover dishes, ONF technician Cédric Bouchet evokes the return of the public, which will cost at least "one million euros" in redevelopment and securing the communication and reception axes.

According to him, it will be necessary in particular to favor access to the beaches by shuttle or by bicycle and "to begin a decline in equipment" (restaurants, car parks, etc.).

The question also arises for the five campsites on the Dune du Pilat, near the national forest, totally destroyed and whose owners have just been received at the Elysée to negotiate a reopening next summer.

To replant, from 2025, the ONF will rely on the concept of "mosaic forest", by diversifying the species. Cork oak, which is more fire resistant than pine, will be used more widely and experimentation is underway with brutia pine, a species from the eastern Mediterranean.

"But the maritime pine will remain the main species", assures Francis Maugard. Introduced in the 19th century, it was "a magical species for the region" because it cleaned up the marshy moor and fixed the dune cord, says this forestry technician.