Between two rows of buildings from the 1950s, in the middle of a large leafy garden, Oleksandre Matviïevski, a 42-year-old worker, has taken out his chainsaw and is attacking all the dead trees to make kindling of them. 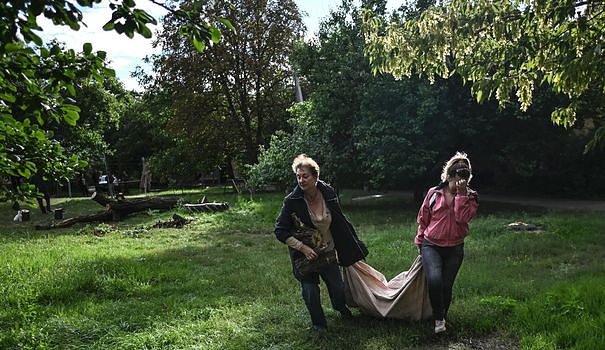 Between two rows of buildings from the 1950s, in the middle of a large leafy garden, Oleksandre Matviïevski, a 42-year-old worker, has taken out his chainsaw and is attacking all the dead trees to make kindling of them.

This residential district organizes itself to feed small brick stoves installed in front of each building for cooking, and to make reserves for the heating stoves at the approach of autumn and while waiting for winter.

"We are going to regroup to warm up (...) and come what may", philosophizes the man with the chainsaw. "We were friends before, now we are even closer."

In the distance, the sound of artillery fire echoes and the sirens go off sporadically. Very present in the city, the Ukrainian soldiers seem to be preparing for long battles.

According to local authorities, the gas supply was interrupted in May in the region of Donetsk, partially controlled by the Ukrainian army, where Kramatork is located, and that neighboring Lugansk, occupied by Russian forces. The fighting damaged infrastructure, according to the same source.

At the end of July, Ukrainian President Volodymyr Zelensky announced that the evacuation of civilian populations from the Donetsk region was compulsory, particularly in anticipation of winter. "Please evacuate," he urged them.

In another residential area of ​​Kramatorsk, recently hit by a Russian strike, Olga, 60, who did not wish to give her last name, has no intention of leaving her apartment.

According to the local press, some residents had to sign a waiver to say they took responsibility for staying.

"I'm not signing anything at all. We're all going to die here together. A grave for all. But we're strong, we're holding on," Olga asserts, raising her fist defiantly and assuring that she doesn't has nowhere to go after 36 years in his apartment.

Sitting on a bench in front of her building, surrounded by neighbors and her dog, she nevertheless admits to being afraid for her young grandchildren who will have to face the cold.

In Kramatorsk, there are still 60,000 inhabitants, against 220,000 before the Russian invasion of Ukraine on February 24, according to figures provided by the city.

Igor Ieskov, spokesman for the municipality, explains that the city "does not have the resources to heat residential areas". But it has taken initiatives such as ordering a thousand traditional wood-burning stoves (bourjouika) from a local entrepreneur to help those left behind.

However, this type of heating remains ill-suited for the many apartment buildings in the city.

Olga's neighbour, Andrïi Kasionkine, 54, opted for another solution: since February, he has been living in the basement of his building with his family, to protect himself from the bombardments, but also to find a milder temperature there. 'winter.

If the humidity is high, he hopes to get a temperature of 10°C in winter, when temperatures can drop to -10°C.

"Today we live here and now. We try not to think about tomorrow," he said, before adding: "we try to live our lives with dignity. Even in this situation".

Closer to the front line, in Sloviansk, a hospital is preparing for the cold. A new boiler capable of burning waste, coal or wood will be installed.

"I am very worried because (...) sick people ask for a certain temperature. They need heat during their treatments", explains Valentina Glushtchenko, the director of the establishment, proud to announce her new acquisition.