In Jerusalem, several churches but only one Santa Claus

Every year, in December, the ball begins again. 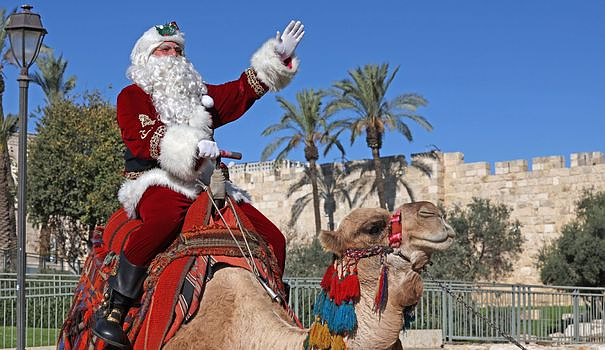 Every year, in December, the ball begins again. The Old City of Jerusalem, vibrant heart of monotheisms with the esplanade of the Mosques, the Wailing Wall and the Church of the Holy Sepulchre, begins to sparkle with green and red Christmas lights under the amazed gaze of tourists and walkers.

Santa Claus does not claim to come from the North Pole but from here. His name: Issa Kassissieh, a 1.90m perch that overlooks children and families queuing to see him.

"We have several religions here in Jerusalem. There are Muslims, Christians, Jews. And people from all religious backgrounds come to visit me in my house," says Issa Kassissieh, 38 and former captain of the selection. Palestinian basketball.

This is the case of Marwa, an eight-year-old Palestinian girl whose family is of the Muslim faith. "I'm not a Christian, but I still love Santa Claus (...) and then we also have a tree at home," she smiles.

When Issa Kassissieh was a child, his father was already dressed as Santa Claus, with his red hood, for his greatest happiness and that of his two sisters. About fifteen years ago, Issa found the paternal hood, put it on and the magic of Christmas worked.

Since then, Issa has studied at Santa School in Denver, Colorado, hopped over to the World Santa Congress, Denmark, earned a certificate from the "famous" Michigan-based Charles W. Howard Santa School, and transformed the ground floor of the family residence into Santa's house.

Built 700 years ago in the Christian quarter of the Old City, the stone house is decorated with sweets, garlands, a large Santa Claus chair. And he offers the traditional spiced mulled wine.

Issa Kassissieh is the "only" Santa Claus in Israel and Jerusalem to have obtained this official certificate, confirms to AFP the Ministry of Tourism of Israel, a country which annexed East Jerusalem, including the Old City, in stride. of the Six Day War in 1967.

"It's quite special to send a message of peace and love to Jerusalem, which is the heart of the world. When we have peace in Jerusalem, there will be peace in the world", believes this Santa Claus who avoids political subjects to preach coexistence.

"It's important for our children to have fun, but we also want them to know the real story of Christmas," said Alison Pargiter, a 52-year-old American, who came with her family to the Issa cave.

On the spot, are the kids asking for world peace for Christmas? "They ask me for an iPhone instead," replies the person concerned. "I don't promise anything and tell them: let's pray and if you're on my list you'll receive something", adds this Santa Claus who kicks off the festive season by entering the Old Town on camelback, in the absence of reindeer.