In Italy, the fear of "Russian interference" in view of the next elections

After Cambridge Analytica, the interference in the American elections in 2016 or the Macron Leaks in 2017, the threat of Russian agitation hovers in an attempt to disrupt Italian political life. 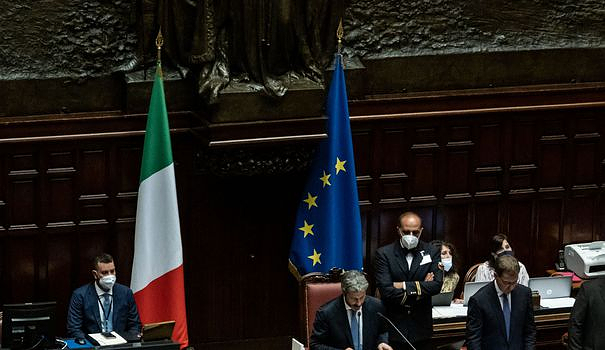 After Cambridge Analytica, the interference in the American elections in 2016 or the Macron Leaks in 2017, the threat of Russian agitation hovers in an attempt to disrupt Italian political life. Just over a month before the general elections on September 25, the Russian political class has been vocal when discussing the deadline. Thursday, on Telegram, former President Dmitry Medvedev assured that he "would like to see European citizens not only indignant at the actions of their governments (...) but to hold them to account and punish them for their obvious stupidities ." The exit looks like a form of pressure and a call for the mobilization of nationalist and Russophile electorates.

In hollow, the politician supports the right-wing and far-right coalition led by Giorgia Meloni, the leader of Fratelli d'Italia, which brings together the parties Forza Italia of Silvio Berlusconi and the League of Matteo Salvini. Well placed, it could come out on top at the end of September. This national alliance is distinguished by its pro-Russian positions, like the far-right French formation led by Marine Le Pen, Rassemblement national, and its ambiguity when condemning Russian aggression in Ukraine. Former Interior Minister Matteo Salvini had long considered traveling to Moscow a few days after the start of the war for a courtesy visit to Vladimir Putin. He finally gave up.

Dmitry Medvedev's stance angered the rest of the Italian political spectrum. The outgoing Foreign Minister, Luigi Di Maio, denounced "interference". In an interview with CNN, the secretary of the Democratic Party, Enrico Letta, of the formation Together for the future - born from the split of the 5-star Movement - also stepped up to the plate. "The people who would be the happiest in the world if Giorgia Meloni won the elections are Putin, Trump, and in Europe Orban," he hastened to react. Matteo Salvini was content to respond by assuring that the Italians only need "their brains to choose their new government".

However, the daily La Stampa revealed secret contacts between the far-right leader's party and Russian representatives, and in particular a meeting in May with a diplomat from the Russian embassy in Italy. While members of La Ligue took part in the government of national unity led by Mario Draghi, the representative of Moscow would have asked Matteo Salvini: "Are your ministers ready to withdraw from the government?"

A clear attempt to destabilize the fragile Italian political balance. The meeting took place two months before the political crisis linked to the defection of MI5 during a vote of confidence and the fall of the executive, on July 21. Salvini denied the newspaper's information, speaking of "nonsense" and "false information". At the same time, Mario Draghi was moved by "foreign attempts" wanting to "weaken Italy's opposition to the Russian president."