In Iraqi Kurdistan, they fled Iran but the bombings caught up with them

A deluge of fire swept through the autonomous region in northern Iraq on Wednesday. 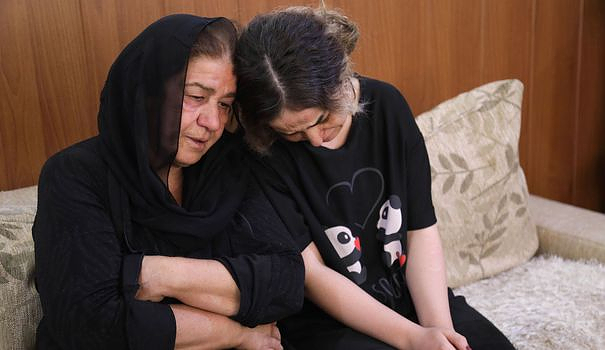 A deluge of fire swept through the autonomous region in northern Iraq on Wednesday. More than 70 missile strikes and strikes by "kamikaze drones" claimed by Tehran, targeting the bases of nationalist factions of Kurds in Iran, but also affecting civilian areas.

At least 14 dead, including a pregnant woman. About fifty injured "mostly civilians, including children under the age of ten", according to the counter-terrorist forces of Iraqi Kurdistan.

"We left by ambulance to the affected sites," recalls Rezane, 22, a nurse in a hospital in a refugee district, where Iranian Kurds have lived for decades, in Koysinjaq.

"We evacuated women and children to keep them away from the bombarded areas," she adds, her face haggard.

She will realize that her fiancé Mohamed, a fighter of the Democratic Party of Kurdistan of Iran (PDKI) is in the sector.

"I called him, he didn't answer," she says. "I kept calling, someone picked up and told me he couldn't answer because he was driving. I knew he was lying."

Dressed in black at her parents' house, Rezane receives relatives who have come to offer their condolences for the death of her fiancé. At his side his mother does not hold back her tears.

Her father scrolls through pictures of the engagement on his phone. Flick to the side, looking serious in traditional Kurdish dress, Mohamed holds the hand of a smiling Rezane. In another photo, the couple appears in fatigues, Mohamed rifle on the shoulder.

Several Kurdish nationalist factions with left tendencies have been established for decades in Iraqi Kurdistan to pursue an armed insurrection against Tehran. Their activities have, however, been in sharp decline in recent years, to avoid any hassle with the influential Iranian neighbor for the Iraqi hosts.

But these movements remain very active on social networks, sharing videos of the demonstrations to encourage the protest that has shaken Iran since mid-September with the death of Mahsa Amini.

Hunched over on his couch, Qadir Bapiry wipes away his tears with a crumpled handkerchief. He opened his house in the center of Koysinjaq for a funeral ceremony in tribute to his friend Osman, a fighter like him in the PDKI, the oldest Kurdish separatist party in Iran.

When Tehran struck, Mr. Bapiri was in his second home, near the premises of the PDKI. He got away with it unscathed.

"I heard a loud explosion. I told the children They bombed us, and a second strike took place near the house", says the septuagenarian with the brush mustache, referring to a missile which dug a crater .

In Tehran, an official of the Revolutionary Guards, the ideological army of the Islamic Republic, recently accused the groups in Iraqi Kurdistan of involvement in the "riots" in Iran.

On Thursday night, the Guardians said strikes will continue against these groups labeled as "terrorists", "until they are disarmed".

In 2018, 15 people were killed in Iranian missile fire aimed at Koysinjaq, the headquarters of the PDKI.

It has been 18 years since Kamil Khafori went into exile in Iraq. "As a (Kurdish) people, we have no rights in Iran," castigates this PDKI fighter.

"Writing in our language is prohibited. The Kurds cannot speak their language," he asserts.

Sitting cross-legged, his assault rifle by his side, the forties in military fatigues does not hide his support for the protest in Iran.

"I hope the protests will continue," pleaded Kamil Khafori, 43. "Their pursuit is the guarantee of the fall" of Iranian power, he adds. "Fear is over".

In Koysinjaq -- also called Koya -- east of Erbil, a bombardment hit a school attended by Iranian refugees, according to the United Nations Children's Fund (UNICEF).

“At least two children were injured and a pregnant woman was killed, according to initial information,” the UN agency said in a statement on Wednesday evening.