Particularly nice souvenirs are everyday objects that cannot be bought in this country. 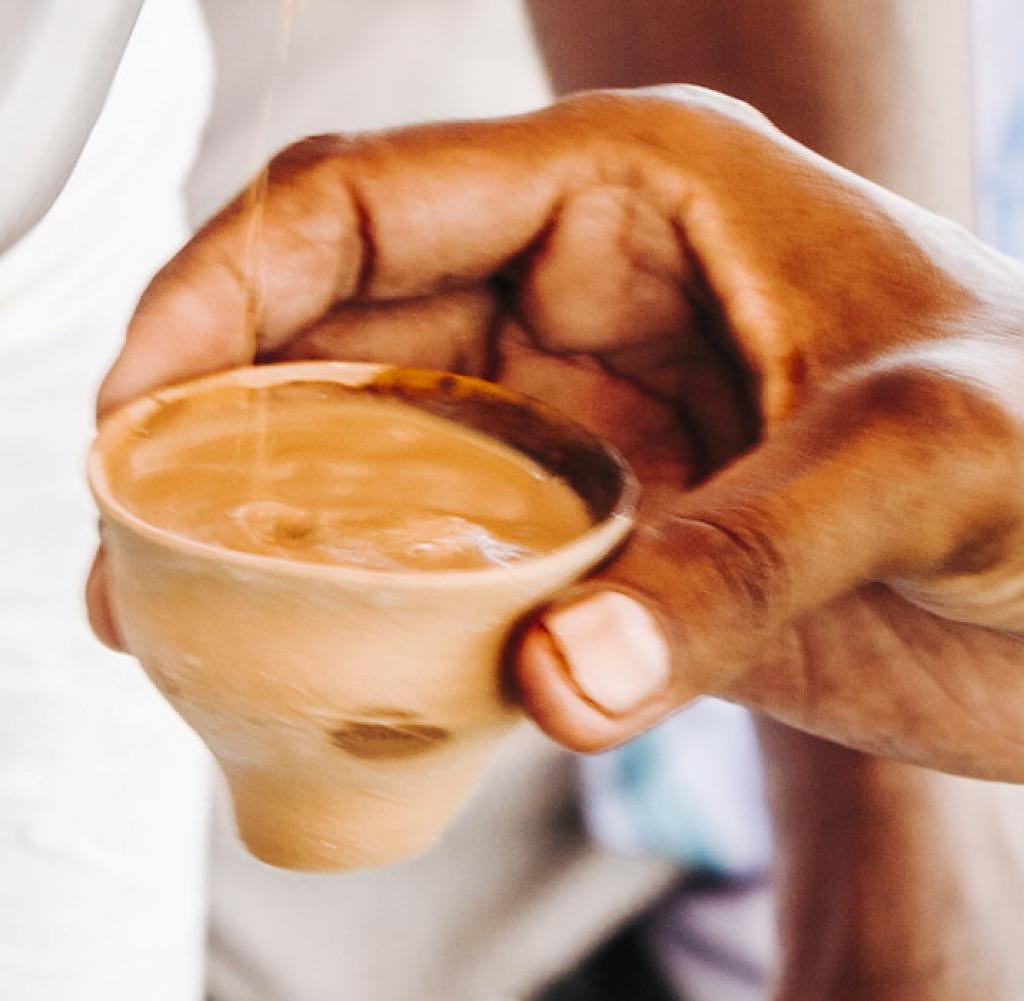 Particularly nice souvenirs are everyday objects that cannot be bought in this country. For example these small clay cups from India, from which the national drink Chai is drunk. These vessels, called kulhar, are handcrafted, without handles, and fired from plain clay. Inside, hot spiced tea is served by roadside tea vendors called chai-wallahs. After use, the Indians throw away the cups in a high arc.

Drinking chai from a kulhar is a culture of its own. It simply tastes better in the unglazed cups, also a little sweeter and earthier than from other containers. Not only chai is served in the clay cups, but also yoghurt, hot milk or Kulfi ice cream made from pistachios, cardamom, brittle and saffron.

Earthenware has been around for over 5000 years. Some ascribe the kulhars a healing effect against various diseases, because the porous clay walls release alkaline salts into the tea. Side effects are not known.

In India, kulhars are always a topic of discussion, as many people consider them to be more sustainable, cheaper and healthier than cups made of cardboard or plastic. And since kulhars are usually used only once, they are considered very hygienic. A not insignificant thought in a country where not every corner is sparkling clean.

The Indian railway is an example of how this topic is dealt with. In 2004 she switched the tea serving to Kulhars. Precisely because they are less harmful to the environment than plastic. In addition, one wanted to help the potters with it.

But criticism quickly arose: the railways literally threw too much clay into the bin. And the cups would have to be fired first - but the kilns would massively pollute the air. The dispute over the clay cups ended with the Indian railway switching back to serving tea in plastic cups in 2008. Sustainability looks different.

Chai-wallahs, who continue to offer tea from kulhars, are mainly found in rural areas of India. However, due to their rustic charm, they are now also offered in chic restaurants in the big cities. There are Kulhar fans abroad too: the UK-based tea company Spiced Bombay Chai, which offers chai made from Indian family recipes, touts the benefits of drinking chai from a clay pot on its website as if it were a cup of gold .

Unfortunately, the clay cups are disappearing more and more from the scene - mainly because plastic cups are easier to handle. You can still get the clay mugs in many tea shops. A chai costs a maximum of 20 rupees, about 23 cents. Sometimes kulhars are small, sometimes big, sometimes conical, sometimes straight. So it's worth keeping your eyes open for this charming and inexpensive souvenir.

‹ ›
Keywords:
IndienLänderporträtsNachhaltigkeitSouvenirs
Your comment has been forwarded to the administrator for approval.×
Warning! Will constitute a criminal offense, illegal, threatening, offensive, insulting and swearing, derogatory, defamatory, vulgar, pornographic, indecent, personality rights, damaging or similar nature in the nature of all kinds of financial content, legal, criminal and administrative responsibility for the content of the sender member / members are belong.
Related News