In Hong Kong, an old Indian sport brings communities together

The professional kabaddi league is hugely popular in India and South Asia. 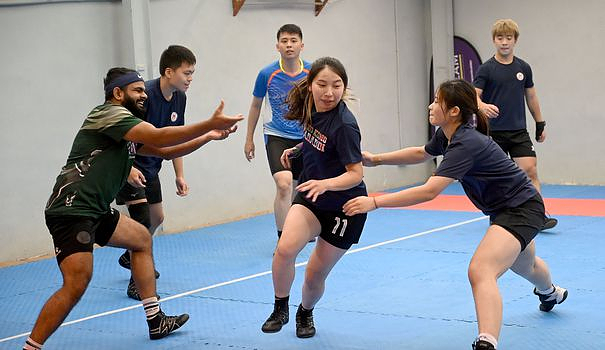 The professional kabaddi league is hugely popular in India and South Asia. But this very physical sport, which consists of touching the opposing team, remains confidential in the rest of the world.

Eight years ago, two Chinese anthropologists set up a team in Hong Kong to promote integration in a city that is not very inclusive, especially for its non-Chinese and non-Western inhabitants.

"We often hear that Hong Kong is a global city in Asia, but we don't have many opportunities to interact with people from different cultures," Wyman Tang, one of the two anthropologists, told AFP.

"We live in the same neighborhood, but it's as if we live in parallel worlds".

At its inception, the Kabaddi United Hong Kong (KUHK) project was a one-time workshop at a university. It now reaches more than 8,000 participants through nearly 80 schools and social organizations.

What a surprise for Royal Sunar, now a KUHK coach, to see his childhood game taught in Hong Kong!

"Kabaddi was one of my interests," says the Hong Kong-born Nepalese. "In a way, the Chinese people here also love this sport."

Kabaddi was born 5,000 years ago in India, with roots in mythology, and similar games then appeared in other Asian countries, especially in Iran, which is also said to be its cradle.

To earn points, a team sends a "raider" to the opposite camp, tasked with quickly hitting an opponent and returning to their base.

The defense must prevent the raider from returning to their court, often causing large scrums.

This activity allowed him to make Chinese friends for the first time and to practice his Cantonese.

There is "an emotional connection in kabaddi, because we hold hands and then we know more about others," he said.

This young man of 22 regrets that apart from kabaddi, ethnic minorities have to fight to be recognized as "local". He himself endured discrimination.

"When I arrived in Hong Kong, when I was traveling by bus or public transport, when I sat down, the person next to me left," he told AFP.

The associations assure that this kind of experience is the norm.

"There are significant race-related issues in Hong Kong," said Shalini Mahtani, president of the Zubin Foundation.

Discrimination is a daily occurrence for South Asians in Hong Kong, she said, giving examples of people not being able to rent an apartment or being told in a job interview that their skin is too dark.

"They're the wrong color in a place that's very color sensitive," she adds.

Ms. Mahtani particularly points the finger at the education system.

"The truth is that many Chinese in Hong Kong have never had the opportunity to have contact with ethnic minorities," she explains.

This was the case for Christy Tai, a student, who joined the kabaddi team after a conclusive trial, attracted by the "team spirit".

She believes that sport is a good way to overcome the language barrier.

"We have to talk to every member of the team (...) when we talk, we can't just talk about the sport, we talk about our lives, our habits and other things," he explains. -she.

Hong Kong is still a long way from a professional kabaddi league, but KUHK founder Mr. Tang is delighted with how Hong Kongers have taken to the game.

"As long as you follow the same rules, you can enjoy the game," Tang said.