In Hermannstadt you can feel the Transylvanian Saxons

Geraniums stand on the window sills of the “Hochmeister” restaurant, and the radio is broadcasting “Antenna Bayern”. 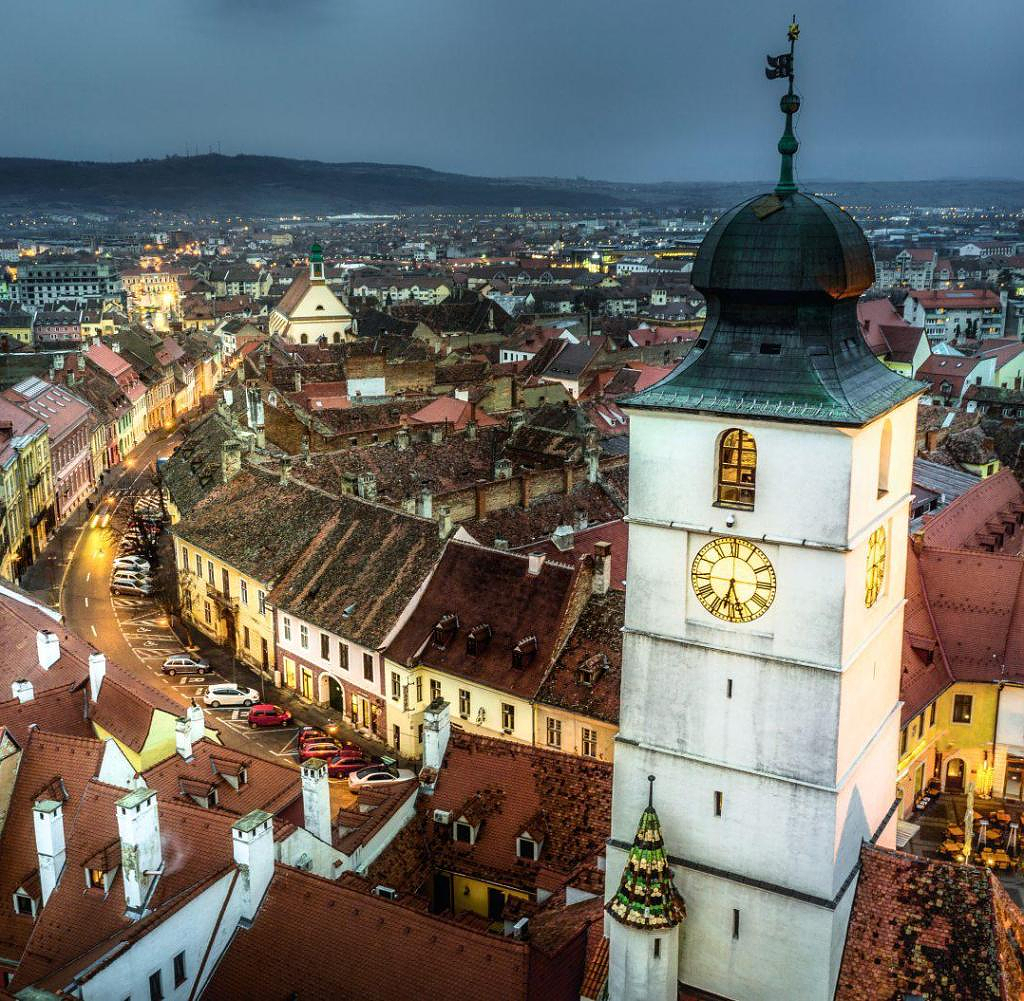 Geraniums stand on the window sills of the “Hochmeister” restaurant, and the radio is broadcasting “Antenna Bayern”. In the "Erasmus book café" in the Teutsch Haus cultural center you will find German classics lined up in yellow Reclam booklets: Goethe, Fontane, Heine, Kleist, Lessing, Novalis, Schiller.

A few streets further you come across a Schiller monument and the Schiller bookstore. The cashier in the souvenir shop immediately switches to German as soon as a visitor slips a German word out. In the "Café Wien" there are extended, Fiaker and Einspänner, Wiener Schnitzel and roast onions. At a later hour, a bar called "Weinkeller" lures in the winding streets of the old town.

In Sibiu, Romania, visitors constantly have the feeling of walking through a German or Austrian city, and not just because of the name. The place, Sibiu in Romanian, is a center of the Transylvanian Saxons, the oldest German minority in Eastern Europe. Although today it only makes up less than one percent of the approximately 425,000 inhabitants, it shapes the face of the city. Kurt Tucholsky remarked in 1918 that Sibiu was “the best, old, good Germany” – and this is still true today.

In addition to the architecture, many bilingual signs are the most visible indication of the cultural heritage of the Transylvanian Saxons, who produced prominent personalities. For example the former mayor of Sibiu, Klaus Johannis, who has been President of Romania since 2014. He had the old town renovated at the time and made sure that his homeland became the European Capital of Culture in 2007.

The visitor strolls up and down steep stairs, through alleys and arcades, over the three well-known squares Großer Ring, Kleiner Ring and Huetplatz, where pensioners feed pigeons, from the upper to the lower town and to Fingerlingsplatz, where goldsmiths once worked.

It seems as if the houses are watching you: the narrow windows in the gabled roofs, designed for better ventilation, look like pairs of eyes. Sibiu is like a large open-air museum that keeps a friendly eye on its visitors. The fact that the city was hardly destroyed during the Second World War and under socialism makes it particularly worth seeing.

But how did the German speakers get to the Balkans, near the wild Carpathians? The Hungarian King Geisa II called them in the twelfth century as settlers, who mainly hired themselves out as farmers, miners and craftsmen. In the beginning there were said to be 500 families who found a new home in Transylvania, the land "beyond the forests". Soon there were more. Contrary to what the name suggests, the settlers did not come from Saxony. Based on the dialect, historians assume that the original homeland of the Transylvanian Saxons is in the Middle Rhine and Moselle regions.

With the Golden Charter of the Hungarian King Andreas II of 1224, the Germans around Sibiu received extensive rights. As the basic law of the Saxons on Königsboden, the statute secured and promoted the cultural and economic boom. The name Transylvania - for the "seven chairs", the most important cities in the region - appeared soon after the settlement and became the country's name.

Over the centuries, the German settlers grew into a solid, autonomous community, now threatened by the invading Turks. At times, Transylvania was under the suzerainty of the Ottomans, but remained Christian. Remains of the red brick city wall, which led to the name Sibiu (Red Castle), and the massive fortifications with watchtowers are reminiscent of the former threat.

Self-government only ended with the Austro-Hungarian Compromise in 1867. Transylvania became part of Hungary. The Saxons found themselves in an unfamiliar role: as a minority. The Romanians of Transylvania were now in the majority, at least in rural areas, and the Hungarians preferred Hungarian speakers. But the German-speakers did not give up, but continued to trade and cultivate their traditions.

After the fall of the Imperial and Royal monarchy, Transylvania fell to Romania. "We see ourselves as Romanian-Germans, not as Romanians of German origin, because we were here before Romania existed," says Winfried Ziegler, 47, in his office of the Democratic Forum of Germans in Transylvania. "We never came to Romania, Romania came to us," adds the native of Sibiu, historian and manager of the forum, which represents the interests of the minority.

During the Second World War, so-called Volksdeutsche, including the Transylvanian Saxons, were enlisted in the Wehrmacht, since Romania was allied with the Nazi regime until it changed sides in 1944. Many Saxons were evacuated towards the end of the war, fled towards Austria and Germany or were deported to the Soviet Union for forced labor from 1945 onwards. Those who stayed in Transylvania were expropriated. Romania came more and more under Soviet influence, in 1947 the king was deposed and the country became a people's republic by Stalin's grace.

The fact that Sibiu still looks so magnificent today is also due to Nicolae Ceaușescu's disinterest. The Romanian dictator came to power in 1965. In the capital, Bucharest, he had parts of the old town demolished to create residential buildings for party officials.

"If he drove by and said it had to go, then it had to go. As quickly as possible. He drove by the next day," says Beatrice Ungar, editor-in-chief of the "Hermannstädter Zeitung". It's different in Sibiu: "Ceaușescu was in Sibiu once and then never again."

The visitor has to thank you. On foot you can follow in the footsteps of the Saxons in the historical core and discover what the Germans created. Absolutely worth seeing: the evangelical parish church, the old council tower and the Brukenthal Museum with several locations, named after Samuel von Brukenthal, the only Transylvanian-Saxon governor in the Habsburg era.

A German-speaking high school also bears his name to this day. The Bridge of Lies, a landmark of the city, was built in Hesse in 1859 and was the first cast-iron bridge in what is now Romania. The magnificent orthodox cathedral, built from 1802, is also worth a visit - in Sibiu, which is characterized by the Middle Ages, it is a comparatively young building.

In her editorial office, Beatrice Ungar shows the first issue of the "Hermannstädter Zeitung" from 1968. "We'll celebrate our 55th birthday next year - if we survive by then." The number of Saxons has been shrinking for decades. In 1933 there were still 250,000 in Transylvania, in 2011 there were only 12,000. The results of the latest census are still pending. The diaspora abroad is many times larger, as is the community in Germany. This is mainly due to the fact that the communist regime allowed large numbers of Romanian-Germans to move west from the 1960s to the 1980s, for whom the Federal Republic paid a kind of bounty to Bucharest.

Will the Transylvanian Saxons be able to preserve their heritage? "Not on our own," says Ungar. It wouldn't work without the Romanians, "for example, our dance groups consist almost exclusively of Romanian children." The German schools, which many Romanian parents also appreciate, played an important role in securing the future.

Winfried Ziegler is confident: “The German minority is viewed very positively in Romania. This helps. Something new will certainly emerge from the remains of the Transylvanian Saxons, expats and German-speaking Romanians.” The aim should be to pass on as much of the traditional as possible – for example with the Transylvanian Cultural Summer, which Ziegler wants a new, contemporary form to take.

And you don't have to worry about Sibiu anyway, says the historian. Here, the German heritage is so evident and loved by all Romanians that it will certainly not be forgotten. Travelers will also be able to quote Tucholsky in the future. And how the poet discovered a piece of the best, old, good Germany more than 100 years ago in the middle of the Balkans.

There are non-stop flights to Bucharest from various German airports, for example with Wizz Air, Lufthansa or Ryanair. Continue by rental car, bus or train to Sibiu. You can also travel by train – by Railjet from Munich or by night train from Berlin to Budapest, then by Intercity (journey time is at least 17 hours; bahn.de; nightjet.com).

Where is a good place to live?

‹ ›
Keywords:
StädteporträtsAuswanderungAussiedlerSiebenbürgen
Your comment has been forwarded to the administrator for approval.×
Warning! Will constitute a criminal offense, illegal, threatening, offensive, insulting and swearing, derogatory, defamatory, vulgar, pornographic, indecent, personality rights, damaging or similar nature in the nature of all kinds of financial content, legal, criminal and administrative responsibility for the content of the sender member / members are belong.
Related News