In Haute-Saône, a combine harvester under a photovoltaic cloud

"You still have to pass between the posts, it's a little more complicated" than in an open field, but otherwise "it's happiness", rejoices Sylvain Raison, 43, sixth generation of the family at the head of this vast farm in Amance, 25 kilometers north of Vesoul. 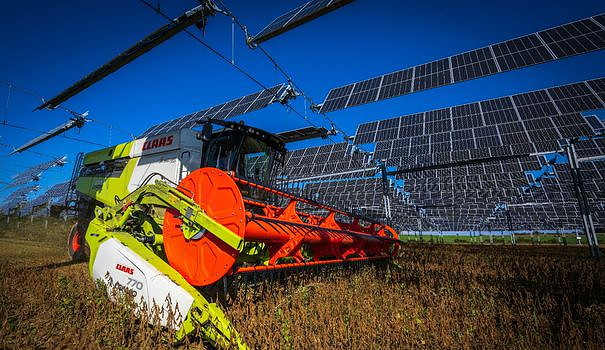 "You still have to pass between the posts, it's a little more complicated" than in an open field, but otherwise "it's happiness", rejoices Sylvain Raison, 43, sixth generation of the family at the head of this vast farm in Amance, 25 kilometers north of Vesoul.

The sound of rotating solar panels is barely distinguishable. Mobile to follow the path of the sun, they stand vertically to let the rain pass. Horizontally, they can limit hail damage or cause the ground to gain or lose a few degrees during cold winter nights or hot summer days.

In the heart of the scorching summer, "the earth under the panels has always remained a little soft and humid" thanks to this "diffuse and moving shade", puts forward Mathieu Debonnet, president of TSE, according to whom France has a " crazy delay" in renewable energies.

The same cereals are sown on two adjacent hectares to determine the impact of this "shade" on crops.

Harvested on Wednesday, the first soybeans grown under panels are on average heavier and richer in protein, according to TSE. Winter wheat will then be sown.

For this installation covering three hectares, the farmer is paid 4,500 euros per year by TSE, which will conduct a "test phase" of nine years. A forty-year lease has been concluded.

The production of 2.5 megawatts-peak - the equivalent of the consumption of 1,350 inhabitants according to TSE - must be connected to the electricity grid at the beginning of December.

Similar experiments, aimed at reconciling electricity production and agricultural production, are also being carried out by other companies in France, especially above vines and fruit trees. That of TSE for large crops is distinguished by the fixing of solar panels on cables, a system that is inspired by cable cars.

In the midst of the energy crisis, agrivoltaism is on the rise: in September, the President of the Republic Emmanuel Macron saw it as "a very important point for our agriculture" and at the beginning of October, a Senate commission proposed a legal framework.

But the subject divides in the agricultural community and the unions of Young Farmers (JA) and the Peasant Confederation do not mince their words. The first ask for "a moratorium on agrivoltaism in France" and the second tackle "a marketing concept which aims to legitimize land and financial opportunism".

Amance's experience was accepted, because "it's a tested space and for the moment, we don't have enough perspective in terms of agronomy to know if (cultivating under panels) works or not. “, explains Justine Grangeot, president of the JA of Haute-Saône. His union first calls for the development of photovoltaics on artificial or fallow land.

But for Sylvain Raison, there is no hesitation: "if we can reconcile the two - agriculture and energy - it's exceptional". Its 850 hectare farm already has a biogas unit and roof panels.

TSE, which has invested more than 15 million euros in this "agricultural canopy" technology without public subsidy, has three other pilots in preparation in the Somme, Côte-d'Or and Calvados on a farm, and in expects around ten by the end of 2024.

"This system provides a triple response: energy production, crop protection against climatic hazards and the generation of a sustainable income for the farmer", boasts Mathieu Debonnet.

From the road, poles, cables and solar panels do not go unnoticed. "Of course it has a visual impact, but you have to know if you want to be energy independent," argues Sylvain Raison. The farmer has not received a complaint from the two surrounding villages, but in the hilly Haute-Saône, the installation is hardly visible from either of them.