In Greenland, tourism on a ridge line in fragile nature

"It's a land that makes you dream", confides to AFP Yves Gleyze, a sixty-year-old Frenchman eager for discoveries off the beaten track. 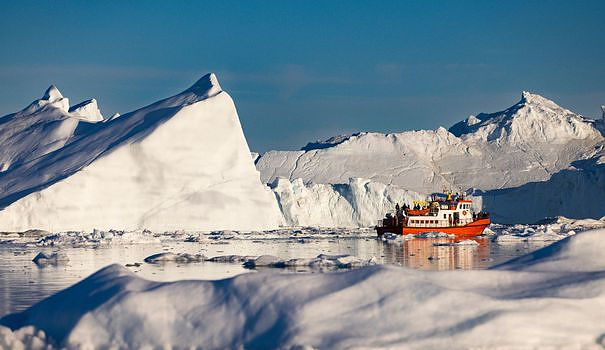 "It's a land that makes you dream", confides to AFP Yves Gleyze, a sixty-year-old Frenchman eager for discoveries off the beaten track.

On leaving the airport of Ilulissat, the third city of the Danish autonomous territory, he discovers a landscape of raw beauty, a gray rock with sparse vegetation which contrasts with the bewildering sight of the icebergs a little further on.

Escaped from the neighboring fjord, exceptional blocks of ice are constantly breaking up on the slack ocean where whales sometimes show themselves.

These postcard landscapes attracted 50,000 people in 2021, ten times more visitors than the port city has inhabitants. More than half make only a short stopover during an Arctic cruise.

Called to grow with the opening of an international airport within two years, this success is, for the mayor of the city, a welcome financial windfall but also an additional challenge because it is already necessary to deal with the daily effects of the global warming.

Over the past 40 years, the Arctic has warmed almost four times faster than the rest of the world, according to the most recent study on the subject.

"Every day, we can see the consequences of climate change: the icebergs are smaller, the glacier is retreating", explains the city councilor, Palle Jeremiassen, also worried about the melting of the permafrost which threatens the stability of certain infrastructures and dwellings.

The immaculate landscapes prized by visitors are withering and the challenge is to protect the local ecosystem without diverting the curious.

To respect the community and the environment, it takes "maximum one boat per day and a thousand tourists per boat", he estimates.

Recently, three cruise ships arrived on the same day, bringing 6,000 visitors, an overflow according to the mayor because the city cannot accommodate them or ensure that they respect protected areas, especially in the fjord.

Neighboring Iceland, where tourism has been flourishing for two decades, is for him a counter-example.

"We don't want to be like Iceland. We don't want mass tourism. We want to control tourism, that's the key to find," he says.

In the meantime, the salvation of Greenland, a territory which seeks to emancipate itself from Denmark, even if it means having to deprive itself of subsidies from Copenhagen which constitute a third of its budget, passes by the sea.

In Ilulissat, where one in three inhabitants lives from fishing, which represents the bulk of the island's own income, climate change is having serious repercussions on local practices.

“When I was young, there was hard ice that you could walk on,” says Lars Noasen, while navigating between the debris of icebergs in Disko Bay.

"Now the ice is no longer as solid. You can't use it for anything, you can't travel around on a sled dog and go fishing like before," continues the sailor.

Over the past two decades, the huge Greenland ice cap has lost 4.7 trillion tonnes, alone contributing to a 1.2 centimeter rise in the oceans, Danish Arctic researchers estimate.

The disappearance of the ice affects fishermen. For better and for worse.

"Ice conditions are changing," says Sascha Schiøtt, a researcher at the Greenland Institute of Natural Resources. "The main fjord was previously closed by huge icebergs and sea ice, and fishermen could not navigate there", which they now do.

Boats can now go out all year round, which has increased the activity, but the size of the fish is shrinking mainly due to overfishing.

For Ejner, a weather-beaten fisherman who prepares his lines in the city's port, the fault lies with the thermometer.

"The climate is too hot and the fish are very small," he laments.