In front of Buckingham, concern and admiration for the Queen

The 96-year-old monarch's doctors expressed their "concern" about the state of health of Elizabeth II, who is at her private residence in Balmoral, Scotland, where she usually spends the summer. 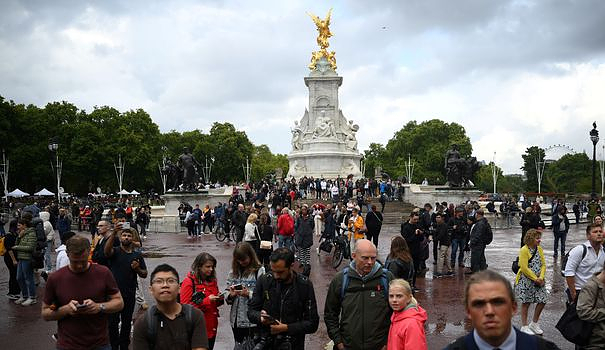 The 96-year-old monarch's doctors expressed their "concern" about the state of health of Elizabeth II, who is at her private residence in Balmoral, Scotland, where she usually spends the summer.

After these rare and worrying medical announcements, hundreds of Britons and tourists present in front of the London palace, at times in the pouring rain, expressed their emotion.

"I was hoping that the Scottish air would do him good," says Elizabeth Jackson, 66, named in honor of the queen. "The problems have multiplied over the past year, it is worrying".

Anxiety is rising all the more in the United Kingdom as his heir Prince Charles and his grandsons William and Harry rushed to the queen's bedside.

For their part, the presenters of the BBC all put on their black suits and ties.

"She has been queen all our lives, she is so calm, so measured," notes with emotion Maureen Barnett, a retired professor interviewed by AFP.

Outside Buckingham, a sign was put up advising tourists that the Changing of the Guard would not take place, before being removed shortly afterwards.

But apart from the large number of journalists and the hundreds of onlookers, who sometimes came with bouquets of flowers, there are few signs of the anxiety that is mounting in the country.

Some, not always informed of the latest news, still wonder about the presence of the media. "The queen is not well," a policeman then explains to them, showing his cell phone.

Beyond the emotion, realism is required in front of the palate.

"It was to be expected, she became very frail, it's sad", observes Ken Cross, an Australian tourist.

"It's the normal course of things, she's old and out of shape," adds Homa, a young woman in her twenties.

"It's sad but she lived her life," notes Diana Leroy, a German tourist. "We don't have a monarchy in Germany, so I don't know how people feel here."

The monarch, in declining health since a night of hospitalization last year, the nature of which has never been revealed, has rarely appeared in public in recent months, her services citing difficulties in getting around.