In France, 66 more names at the memorial of reporters who died in action around the world

The relatives of several victims of the year 2021-2022, including the Frenchman Frédéric Leclerc-Imhoff, spoke during the ceremony, organized by the NGO Reporters without Borders (RSF) as part of the Bayeux Prize for war correspondents 2022. 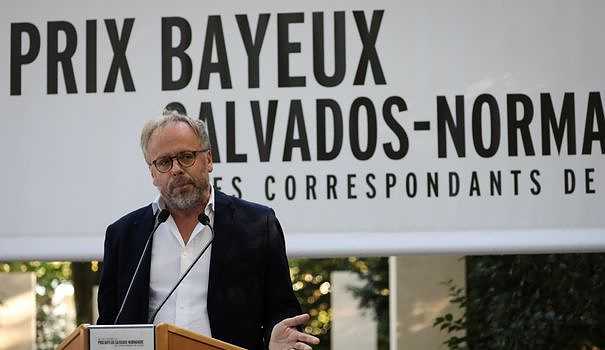 The relatives of several victims of the year 2021-2022, including the Frenchman Frédéric Leclerc-Imhoff, spoke during the ceremony, organized by the NGO Reporters without Borders (RSF) as part of the Bayeux Prize for war correspondents 2022.

Emotion filled the undergrowth hosting the memorial during successive speeches by Shireen's niece, Lina, celebrating "her aunt, her best friend, her inspiration", who wished "justice, truth and peace for the world ", and of Sylviane, the mother of Frédéric Leclerc-Imhoff, according to whom he "did not give his life for the information, it was taken from him".

After the death of her son, the reporter's mother had sent a message to the secretary general of RSF, Christophe Deloire, declaring that "his short life will have had a meaning", like that of Maks Levin.

The latter "wanted to take a photo that would put an end to this war (the invasion of Ukraine by Russia, editor's note)", according to Markiian Lyseiko, one of his friends, also a war photographer.

Frédéric Leclerc-Imhoff was a 32-year-old French freelance journalist, also killed in Ukraine, in the Donbass in the spring.

Al Jazeera star, American-Palestinian journalist Shireen Abu Akleh was shot dead on May 11 while covering an Israeli military operation in a Palestinian camp in the occupied territories.

Questioned by AFP, the secretary general of RSF recalled that 400 journalists are in detention today in the world and that 50 to 70 are murdered every year because of the exercise of their profession, including 31 since the 1st January.

"We are in a moment of explosion of communication and the powers, whatever they are, no longer have an interest in passing through the filter of journalists. Some even believe that their interest is to eliminate them", has analyzed M. Deloire.

However, he noted that "over the decade, there has been a drop in the number of journalists killed. The editors are much more cautious today, perhaps because the conflicts in Iraq and Syria have been very deadly".

The Prix Bayeux, which takes place from October 3 to 9, honors war reports from around the world. The prize giving will take place on Saturday.