In Equatorial Guinea, the poorest are still waiting for the promised social housing

President Teodoro Obiang Nguema Mbasogo, who has ruled this small oil-rich Central African country with an iron fist for 43 years, is sure to be proclaimed the winner of the November 20 presidential election on Saturday, in the face of repressed opposition. 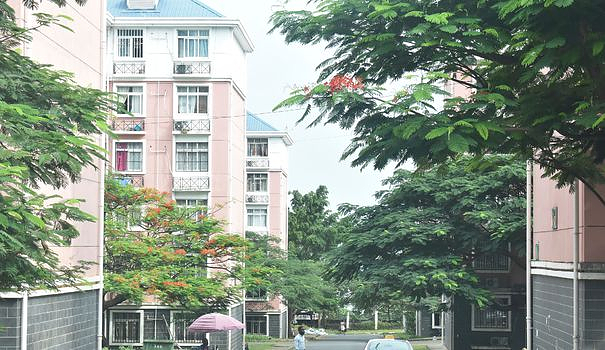 President Teodoro Obiang Nguema Mbasogo, who has ruled this small oil-rich Central African country with an iron fist for 43 years, is sure to be proclaimed the winner of the November 20 presidential election on Saturday, in the face of repressed opposition. and muzzled.

In certain districts of Malabo, rows of recent buildings, all identical, stretch as far as the eye can see. In Buena Esperanza, 2,300 cozy-looking houses, exact copies, have spread since the beginning of the 2010s.

Because, in the 2009 presidential election, Mr. Obiang had promised "social housing for all".

These buildings sprouted like mushrooms at a time when soaring oil prices considerably enriched this country, which has one of the most closed and authoritarian regimes in the world, but where wealth is concentrated in the hands of a few families, relegating the vast majority to poverty.

Mr. Obiang, who at the age of 80 holds the world record for longevity in power for a head of state still alive, outside the monarchy, then proclaimed that he was going to raze all the slums of the country.

And first and foremost that of Nubili, a real wart in the heart of a rather pretty capital and where thousands of people are crammed into small tin or wooden shacks in a maze of narrow and unsanitary streets.

Since then, some 20,000 social housing units have come out of the ground in this country of nearly 1.5 million inhabitants, according to the national property management company (ENPIGE). However, the poorest still do not have access to it.

Sitting at the foot of his wooden hut in Nubili, Julio Ondo, 70, despairs of one day living in "decent housing". "We made fun of the poor," he says.

Because if Buena Esperanza were to make it possible to rehouse part of the inhabitants of Nubili, the conditions of resources are prohibitive: 10 million CFA francs (15,000 euros) for the sale for a small house, payable in monthly installments of 50,000 CFA francs (75 euros).

The World Bank estimates that the vast majority of the population lives below the international poverty line, 2.15 dollars (2 euros) of income per day and per person.

However, Equatorial Guinea is ranked by the World Bank as the third richest country in sub-Saharan Africa in annual GDP per capita in 2021 (8,462 dollars). But ranked 172nd in the world out of 180 in Transparency International's corruption barometer.

In 2006, when the oil windfall was in full swing, the Bretton Woods institution estimated that nearly eight out of ten inhabitants (76.8%) lived "below the extreme poverty line". Since then, these statistics are no longer available in the absence of data on the country.

"The government had given us housing vouchers so that we could go and live in Buena Esperanza, but we had to pay" an entry deposit of "1.5 million CFA francs (2,270 euros)", deplores Antonio Omecha, 72 year. An astronomical sum for this plantain farmer who says he earns 20,000 FCFA per month (30 euros).

"Do you think someone who spends seven days without even earning 2,000 CFA francs (3 euros) can own these homes?" adds a neighbor, Tobias Ondo, 65 years old. “It may be after my death that I will go and live in social housing promised to the poor by the president,” he breathes into his graying beard.

These promises had aroused a wave of hope in Nubili, to escape deplorable hygienic conditions, epidemics and frequent fires in the slum.

On November 6, the third day of his campaign, President Obiang coldly admitted that social housing for "people with low incomes" had been "still taken" by "people capable of building their own house". Not saying how to fix it.

In Buena Esperanza and elsewhere, these properties have been diverted from their social purpose, sociologist Nsogo Eyi told AFP. "Some powerful and rich men have bought them to rent them out, especially to expatriates" who pay a high price, he laments.

In these neighborhoods, the owners refuse to talk.

For them to be accessible to the inhabitants of Nubili, "these accommodations would have had to cost no more than 500,000 CFA francs (756 euros) with monthly payments of 1,000 or 2,000 francs per month", calculates Martinez Obiang, of Atom Finances, a microfinance company.