In Ecuador, the other "City of God" plagued by misery and violence

Like the 2002 film of the same name, which chronicled the life of one of the most violent favelas in Rio de Janeiro, the "City of God" is camped on a green hill in the northwest of Guayaquil, the second largest Ecuadorian city where 861 homicides have been committed, i. 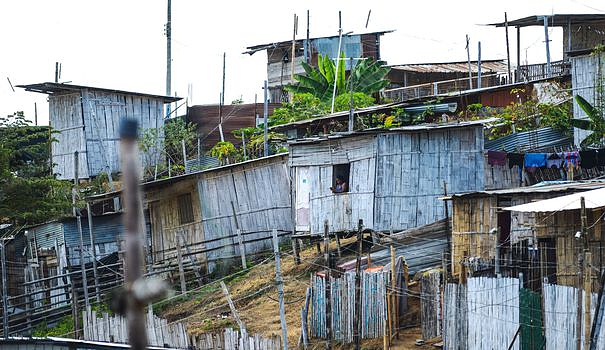 Like the 2002 film of the same name, which chronicled the life of one of the most violent favelas in Rio de Janeiro, the "City of God" is camped on a green hill in the northwest of Guayaquil, the second largest Ecuadorian city where 861 homicides have been committed, i.e. a third of those recorded since the beginning of the year in Ecuador.

It is one of the 55 slums located in this vast district - nicknamed Mount Sinai - where illegal construction has sprouted like mushrooms in recent years, in line with the growing prosperity of the huge port from the 2000s.

Half a million people live in Mount Sinai, on 9,300 hectares (100 km2), without basic services and most often in makeshift dwellings, according to the last municipal census of Guayaquil (2.8 million inhabitants in total ).

In the "City of God" alone, nearly 40,000 poor people are crammed into half-finished wooden, sheet metal and brick dwellings, so cramped that the toilets are outside.

The first people to settle here were evangelical Protestants who gave it the same name as the famous Brazilian favela.

Marisol Chavez, 40, is one of the neighborhood leaders. In her modest home, two beds flooded with stuffed animals are pushed together. Evicted from another illegal neighborhood, she arrived on the hill in 2019 and survives small informal businesses. But the birth of her last baby now forces her to stay at home.

"We have almost nothing and we suffer a lot," she says. Here, "there was nothing, just weeds, dirt, and thorny shrubs".

Housing overcrowding in Guayaquil (14.6%) exceeds the national average (9.6%), according to the statistical authority INEC. Poverty (20.1%) is also higher there than in the rest of the country (16.7%).

The "City of God" also has no drinking water. Water is brought in at exorbitant prices by tanker trucks bumping along the dirt roads.

Misery, overcrowding, lack of services and violence constitute what the UN-Habitat agency calls a "poverty trap", from which entire communities cannot escape for generations, in the absence of any alternative.

"We live trapped, leaving my house means paying rent and there is no money", summarizes Rosa Obando, who has lived in the neighborhood for 15 years.

As the narcos have increased their grip on the city's port, the criminal gangs have extended their power over a crowded Mount Sinai.

“Housing under surveillance”, can we read on a panel cast on a hovel. A warning to "those who owe money to Los Choneros", blow neighbors.

"Los Choneros" are one of 26 criminal organizations operating today in Ecuador, a once pacified neighbor of Colombia and Peru (the world's two largest cocaine producers), now a powder shipping center white to Europe and the United States.

The country is now a sanctuary for organized crime fought over by multiple gangs, often under the tutelage of the bloodthirsty Mexican cartels of Sinaloa, Gulf and Los Zetas.

Gangs are extorting Mount Sinai communities in exchange for so-called "security". This is the price to pay to be able to live here, confident, frightened, its inhabitants.

In a few days, members of these gangs will go from house to house charging "two dollars", warned one of the leaders of a local faction, according to one of the residents, speaking on condition of anonymity by fear of reprisals.

The gangs recruit with all their might and use young people, most of the time unemployed, as cheap labour.

These kids "are a hundred times more likely to be caught in drug trafficking", regrets César Cardenas, director of the Observatory of public services in Guayaquil.

"Nothing here allows them to have a life project or to project themselves into the future", he is sorry.

Before the first illegal settlements, a drug trafficker had built his hacienda here, recalls the architect and urban planner Rosa Rada.

With the construction of the Perimetral road, which connects the industrial area to the port, the hill began to be "urbanized" in 1984.

It still takes almost half an hour for the inhabitants of the "City of God" to walk to this road, then more than an hour by public transport to go to the city center .