In East Jerusalem, a Palestinian neighborhood fears becoming an "island" surrounded by Israel

Israeli authorities last week pre-approved the construction project for the Givat Shaked settlement, 700 housing units on a small plot of 3. 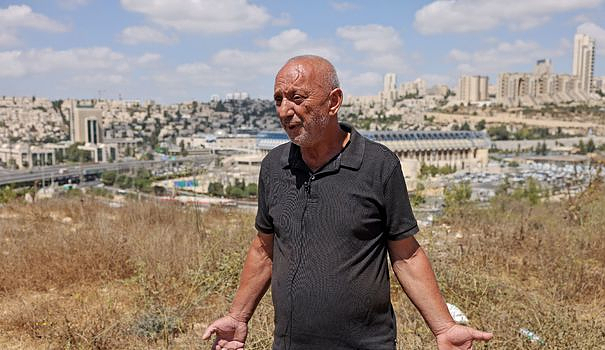 Israeli authorities last week pre-approved the construction project for the Givat Shaked settlement, 700 housing units on a small plot of 3.8 hectares on the edge of Beit Safafa, an occupied and annexed area of ​​East Jerusalem. by Israel.

In a few months, the Jerusalem Planning Committee could give its final green light to the project, which was first launched in the 1990s before being canceled in the face of strong international criticism. Four 24-storey buildings are to sprout in front of the three- or four-storey Palestinian houses.

On the ground covered with plastic waste and brushwood roasted by the sun, Farid Salmane explains that "like any Palestinian, (he is) afraid of what will happen when it will become a colony".

"Tomorrow they will be right here, all around, on our side of the border", fears this 66-year-old gardener, referring to the "Green Line" to which Beit Safafa is glued and theoretically separating the east and the west of Jerusalem.

According to the Jewish state, a large part of the land is made up of plots purchased by Jews before 1948, the date of the creation of Israel, and can therefore, according to Israeli law, be recovered.

Beit Safafa, a neighborhood of nearly 16,000 inhabitants, is bordered to the north by major highways linking the center of Jerusalem to the settlements of the occupied West Bank, to the southwest by the settlement of Gilo and to the southeast by that of Givat Hamatos.

With the Givat Shaked project, Beit Safafa would find itself surrounded, cut off from the rest of East Jerusalem and the adjacent West Bank, including the large city of Bethlehem located a few kilometers away.

"It's like a Palestinian island," notes Daniel Seidemann, Israeli lawyer and specialist in the Holy City.

Launched in 1995, the Israeli plan had been strongly condemned abroad and examined as far as the UN Security Council. Washington had vetoed a resolution but pressured Israel to scrap the plan, fearing it would derail the peace process with the Palestinians amid the Oslo Accords.

With the revival of the project, the US office in charge of Palestinian Affairs said it was "essential for Israel and the Palestinian Authority to refrain from any unilateral action that escalates tensions".

The plan is reborn less than two months before new legislative elections in Israel, scheduled for November 1. "The government is under pressure (...) and will do nothing that will anger the right," said Mr. Seidemann, founder of the anti-colonization organization Ir Amim.

"As I committed myself to, despite all the internal and external pressures, the Givat Shaked project was approved," said Interior Minister Ayelet Shaked (radical right) last week.

"It is unthinkable to prevent the development and construction of this area, like the rest of the city," she added in an interview with a local news site, touting a project to "increase the supply of accommodation".

For Mr. Seidemann, the project has nothing to do with housing needs, otherwise they would be destined for the Palestinians.

"On the contrary, the land is torn from Beit Safafa to make it an Israeli neighborhood, for geopolitical and ideological reasons: to establish the power of Israel alone, in the entirety of Jerusalem", he explains.

Israel claims that Jerusalem is its "indivisible" capital, while the Palestinians hope to make East Jerusalem the capital of the state to which they aspire.

"By establishing an overwhelming Israeli presence in East Jerusalem, it will fragment and marginalize the Palestinians there," returning a Palestinian capital to the state of a pipe dream, Seidemann said.

The Israeli municipality assured AFP that it was planning the construction of residences in Beit Safafa, without further details.

The head of the Beit Safafa council, Mohamed Aliane, promises to take legal action to obtain, "at a minimum", that the Palestinian homes in the neighborhood stop being destroyed by Israel.

The Jewish state frequently demolishes properties in East Jerusalem that it says were built without permits. The Palestinians claim that these permits are almost impossible to obtain.

Farid Salmane is overwhelmed by this double standard: "We are not against building, but they are also supposed to think of us".