In Dubai, temple of luxury, free bread distributors for the poorest

The city, which imports almost all of its foodstuffs, is not immune to soaring prices, a global trend exacerbated by the war in Ukraine. 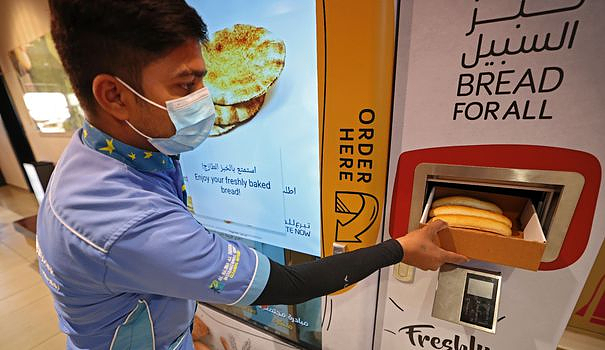 The city, which imports almost all of its foodstuffs, is not immune to soaring prices, a global trend exacerbated by the war in Ukraine.

In front of one of the ten distributors installed this week in supermarkets, Bigandar observes attentively the touch screen allowing him to choose between Arabic bread, bread for sandwiches or chapatis (Indian pancakes).

The credit card reader is not used to pay but to make donations.

"A friend told me that there was free bread, so I came," the young Nepalese told AFP, not wanting to give his full name.

Like millions of Asian immigrants, he came to try his luck in the city of excess, located in the United Arab Emirates.

According to the Dubai Statistics Center, the food price index rose by 8.75% in July, year on year, while the cost of transport jumped by more than 38%.

At the origin of the initiative on bread distributors, the foundation of the leader of Dubai, Mohammed ben Rashid al-Maktoum.

“The idea is to go to disadvantaged families and workers, before they come to us,” its director Zeïnab Joumaa al-Tamimi told AFP.

Anyone in need can now get a pack of four reheated buns in less than two minutes, just "by pressing a button", she says.

The United Arab Emirates, an oil-rich state, has a population of nearly 10 million inhabitants, about 90% of whom are foreigners, middle-class expatriates and especially poor workers from Asia and Africa.

Less rich in hydrocarbons than the capital Abu Dhabi, Dubai is counting on this army of workers to build skyscrapers or even support the service sector, from real estate to luxury tourism, which has made its reputation.

Employed as a car washer for three years, Bigandar says he is paid three dirhams (0.84 euro cents) per vehicle, and relies on tips from customers to generate 700 to 1,000 dirhams per month (between 195 and 280 euros ).

"My employer covers housing and transportation, but not food," he says.

Sign of the growing difficulties of foreign labor, a rare strike was led in May by delivery men demanding better wages in the face of rising gasoline prices.

In July, the authorities announced the doubling of social aid, but only for the handful of Emirati families with incomes below 25,000 dirhams per month (about 7,000 euros), considered to be disadvantaged households. These aids do not include foreigners.

"We are living in a particular economic situation, because of inflation and rising interest rates," Fadi Alrasheed, a Jordanian executive who has been living in Dubai for 20 years, told AFP.

"There are many people whose wages are low and who, with the rising cost of living, can no longer meet all their needs," he notes, welcoming the free bread initiative.

According to the latest UN World Migration Report, the United Arab Emirates are home to nearly 8.72 million migrants, mainly from India, Bangladesh and Pakistan.

The Hentley and Partners firm counts more than 68,000 millionaires and some 13 billionaires in Dubai, ranked the 23rd richest city in the world.