In the streets of Beirut, the flags of Brazil, Argentina or Germany are flying, even if the enthusiasm is less strong than at previous World Cups, the Lebanese being hit hard by the economic crisis. 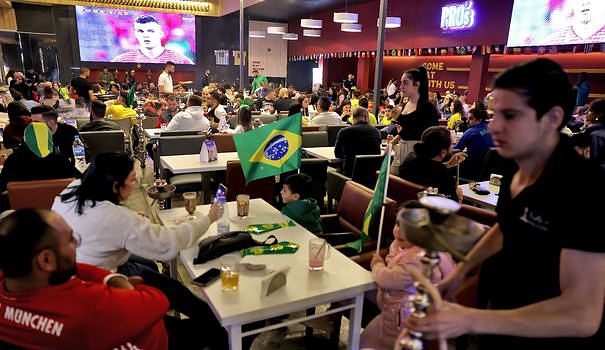 In the streets of Beirut, the flags of Brazil, Argentina or Germany are flying, even if the enthusiasm is less strong than at previous World Cups, the Lebanese being hit hard by the economic crisis.

From his small mobile phone shop in the north of the capital, Jean zaps between more or less gray channels. He went up against Lebanese officials whom a large part of the population accuses of corruption and incompetence.

“They deprived me of the only thing that keeps me entertained in the midst of all this bad news,” exclaims the 58-year-old white-haired man.

If many football fans in Lebanon use streaming, for him, watching the matches on his phone (streaming) is impossible: "I only see with one eye", he admits.

Without a head of state since November 1, Lebanon, in full economic collapse, is led by a resigning government unable to take important decisions.

The cabinet, which had maintained the hope of a free broadcast until the start of the World Cup, was unable to release the five million dollars requested by the BeINSports channel to sell the rights to public television. of retransmission.

Due to the financial crisis that began at the end of 2019, only the most assiduous and well-off can afford to go to cafes to follow the matches broadcast on giant screens.

In the suburbs of Beirut, a café took on the colors of Brazil to welcome fans who came to watch the match, wearing caps in the colors of the "Seleção" and waving flags.

"We Lebanese, we felt after these three years that we needed this entertainment," said Samer Idriss, 18, Brazilian flag in hand.

"We try to have fun at the cafe... as much as the economic situation allows us," he adds.

He explains that the slowness of the wifi connection in Lebanon and the high cost of 4G dissuade him from watching the matches in streaming. And the almost total absence of power, with the State only providing one or two hours a day, complicates the situation.

Samer pays 250,000 LL (six dollars) for entrance to the cafe. Some cafes charge double, a fortune for many Lebanese.

The economic crisis that has hit Lebanon since 2019, one of the worst in modern times according to the World Bank, has plunged more than 80% of the population below the poverty line according to the UN.

Most of the Lebanese have seen their purchasing power crumble in the face of the collapse of the local currency and galloping inflation.

"We can't pay 125 dollars for a subscription (to cable), so we look at the café by paying 150,000 LL (3.75 dollars) the entrance or in streaming", admits for his part Zein Nasreddine, security guard, from a popular cafe in the southern suburbs of Beirut.

Some destitute fans even follow the matches together on the sidewalk, standing in front of illuminated cafes while the streets are plunged into darkness for lack of power.

Charbel Ghoussoub and his sister prefer to stay at home. They clubbed together to subscribe to a cable operator during the World Cup for 90 dollars, more than the average minimum wage, a luxury.

"They will even have succeeded in depriving the Lebanese of the simple pleasure which is to follow the World Cup for free", regrets Charbel, 35, who criticizes the government for its "inaction".