On Sunday, a crowd of demonstrators, responding to calls on social networks, expressed their anger in particular in Beijing, Shanghai and Wuhan, catching the police off guard. 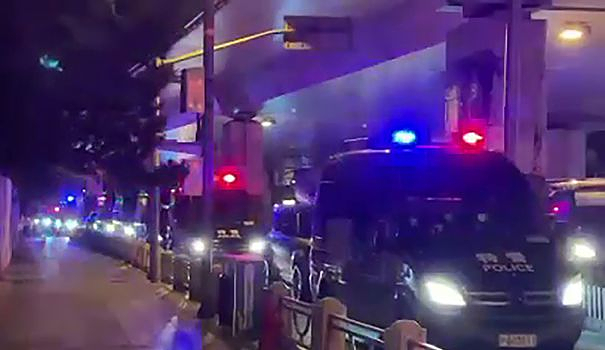 On Sunday, a crowd of demonstrators, responding to calls on social networks, expressed their anger in particular in Beijing, Shanghai and Wuhan, catching the police off guard.

Among the slogans chanted in unison: "No Covid tests, we are hungry!", "Xi Jinping, resign! CCP (Chinese Communist Party, editor's note), withdraw!", "No to confinements, we want the freedom".

By its extent on the territory, the mobilization, whose total number of participants is difficult to verify, seems the most important since the pro-democracy riots of 1989.

It is the culmination of a popular discontent that has continued to rise in recent months in China, one of the last countries in the world to apply a strict "zero Covid" policy, which involves repeated confinements and quasi-daily PCR tests of the population.

The deadly fire in Urumqi, capital of northwestern Xinjiang province, has sparked anger among many Chinese, with some blaming health restrictions for blocking relief work.

But the demonstrations this weekend have also brought out demands for more political freedoms, even for the departure of President Xi Jinping, who has just been reappointed for an unprecedented third term at the head of the country.

Monday morning, a police presence was visible in Beijing and Shanghai, near the places of gatherings the day before, noted AFP journalists.

Near the Liangma River in Beijing, where more than 400 young Chinese gathered for several hours on Sunday evening, with cries including "We are all people of Xinjiang!", police cars were parked and officers were patrolling the along the channel.

In Shanghai, one of the streets occupied by the crowd during the night was now surrounded by blue palisades along the sidewalks to prevent any new gathering.

On Sunday, clashes took place between demonstrators - some wearing flowers or white sheets as symbols of censorship - and the police, and several people were arrested.

On Chinese social media, any information about the protests appeared to have been scrubbed Monday morning. On the Weibo platform, a sort of Chinese Twitter, searches for "Liangma River" and "Urumqi Street", two of the places of protest the day before, did not yield any results related to the mobilization.

Videos showing students singing and protesting in other cities had also disappeared from the WeChat network. They were replaced with messages stating that the post had been flagged "due to sensitive or violating the rules".

On Weibo, searching for the keyword

Chinese authorities' strict control over information and health restrictions on travel within the country make it difficult to verify the total number of protesters over the weekend.

But such a widespread uprising is extremely rare in China, given the crackdown on any form of opposition to the government.

Demonstrations also took place on Sunday in Wuhan (center) - where the world's first case of Covid-19 was detected almost three years ago -, in Guangzhou, in Chengdu and in Hong Kong.

The People's Daily published a text on Monday warning of "paralysis" and "weariness" in the face of the zero Covid policy, without however calling for an end to it.

"People have now reached a boiling point because there is no clear direction on the way forward to end the zero Covid policy," China policy expert Alfred Wu Muluan told AFP. at the National University of Singapore.

"The party underestimated the anger of the population," he adds.

The protests worried investors, and Asian stock markets were down sharply at the open on Monday.

As for the number of Covid-19 cases in China, it reached a new record since the start of the pandemic on Monday, with 40,052 cases, even if the vast majority are asymptomatic. And the figure remains very small compared to the Chinese population (1.4 billion inhabitants).