In Canada, Hudson Bay, summer refuge for thousands of belugas

Every summer, some 55,000 beluga whales migrate from Arctic waters to Hudson Bay, Canada. 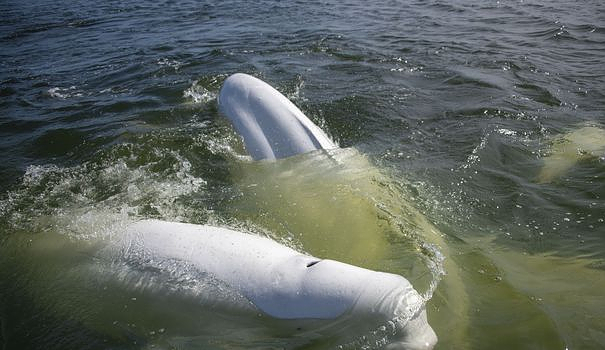 Every summer, some 55,000 beluga whales migrate from Arctic waters to Hudson Bay, Canada.

Far from the Seine where a beluga got lost in early August north of Paris, this Canadian estuary allows these small white whales, which move in schools, to give birth in these relatively warmer and sheltered waters.

Beneath the somewhat murky surface, the belugas seem to be enjoying the presence of the cluster of tourists who have come to Churchill to observe them.

This small town of 800 inhabitants is not easily accessible since only the train or the plane can get there. No road leads there.

For more than seven months of the year, between November and June, the entire bay is entirely frozen. The melt marks the return of the belugas.

The place is ideal for them: they can protect themselves from killer whales, and the estuaries are rich in food.

It is easy to distinguish the youngest who are still gray alongside the adults who display their whiteness.

Beneath the surface, they seem to be smiling all the time.

But what is most striking about these whales is their communication, which can be heard from the surface at times.

Nicknamed "sea canaries" because of the fifty or so vocalizations (hissing, clicking, tinkling, etc.) they emit, they are "social" animals with a "very complex communication system", says Valeria Vergara, who has been studying them for years.

“The beluga is a species centered on sound. It is, for them, like vision for us”, explains the researcher at the Raincoast Conservation Foundation.

Facing the hydrophone speaker, this 53-year-old scientist tries to sort through the multitude of sounds that come up from the depths.

For a non-expert ear, it is a surprising and cacophonous ensemble.

"Belugas must rely on sound to communicate but also to locate themselves, to find their way, food...", adds the one who has learned to recognize "contact cries" which are used in particular by mothers to guide their young. .

The newborns, who measure 1.80 meters and weigh 80 kg, remain dependent on their mother for two years.

In adulthood, this mammal, which generally evolves in the icy waters around Greenland and in the north of Canada, Norway and Russia, can reach a size of six meters and lives between 40 and 60 years.

The Hudson Bay beluga population is the largest in the world.

But the reduction in ice due to climate change, in an area that is warming three to four times faster than the rest of the planet, is a cause for concern for researchers.